Christopher Legaspi was tired of drum apps that had the same ol’ unoriginal acoustic sounds, so he did the next logical thing: he made his own app. Determined to offer more than what he was getting, he finished it, named it Q-FEVER Drum Machine, and released it mid-February.

In his quest to developing a better drum app, Legaspi jam-packed Q-FEVER Drum Machine with six different drum kits, each with 16 individual drum pads, all with a different, high-quality sound. Many of the sounds–ranging from dub-step to house to trip-hop–are found solely in Q-FEVER, which makes this drum app one-of-a-kind. Tapping on the pads will produce a sound, while holding your finger on a pad will allow the full sound to unveil. To create a roll effect, scratch your finger across the pads; sliding your finger across them will create a flam effect. 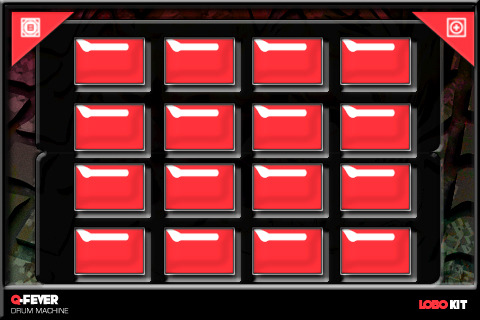 In the spirit of full disclosure, I don’t play drums, or any kind of percussion instrument–not even in Rock Band, so perhaps the full value of Q-FEVER Drum Machine is intrinsically lost upon me (I do like watching people beatbox, though…). It would probably take someone who is invested in making beats to use this app to its full potential. Playing with this app was cool, but soon lost its shine as poking buttons to make random noises would; the latency of the buttons weren’t the greatest, as well. Aside from the niche target audience, the design of this app could use a little work. Other than the drum pads, there is no indication of having tapped an option: some movement to the menu options would be nice, as well as enlarging the text. The instructions to play are displayed in both Kits and Info, and there is really no need for that. Lastly, the designs of the “Back to Main Menu” and “Back to Kits Menu” buttons are completely ambiguous, as neither of them indicate their use clearly. Q-FEVER Drum Machine has much to offer, but perhaps a clean-up would be worthwhile.