In our increasingly expanding world and influxes of data, sometimes it’s just impossible to remember everything; Post-it adhesives and notepads are popular for a reason. Well, worry no more about losing all your bits and scraps of paper, because Spring Partners has released Springpad, an application that’ll remember everything for you. And by everything, it pretty much encompasses every occasion you can think of.

From quick notes to birthdays to recommendations, this handy app will store all sorts of various information. Use the Add Stuff home screen to jot down quick thoughts or reminders to yourself. Or, if you have the time to, you can also use the By Type button on the home screen to create a new entry in ten different categories. For example, if your friend recommends a new restaurant to try out, just tap on Restaurant, fill in the name, and hit Search. The app will pull the restaurant’s information (if it can be found) and fill it in for you in the app, which you can add photos or notes to later on. The same process goes for categories such as books, movies, or albums. If you’re using an iPhone, you can utilize it’s camera as a barcode scanner, as well as taking photos of things important to you. 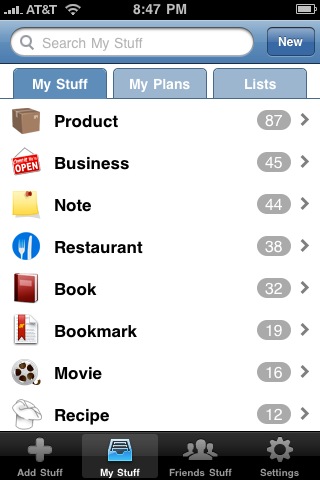 Further information can be stored in the My Stuff tab, such as contact information and lists. Shopping lists, task lists, packing lists…you name it, it’s probably in here; there’s even an alarm function. Or, if it’s not, you can make a list of your own to further categorize your needs. You can add due dates and check things off to your content. The beauty of Springpad is use of the internet: not only does it pull useful information for you, but everything you add or type into the app is synchronized in the web version at springpadit.com, so you’ll never lose any bit of it (you must register for an account upon first launch). There’s even a social networking aspect built in, as you can share lists or recommendations by making them Public on the app, or on Facebook or Twitter using the web version.

There’s so much functionality to the Springpad app, it’s kind of dizzying. It’ll definitely take a few moments to learn your way around it, but once you do, it becomes quite a powerful tool to have for such a small package. It’s not the prettiest productivity app out there, but it is a productivity app: beauty is not the point. Catalogers, indexers, and people with OCD tendencies would love using this app; everybody else should check it out, if only for the fact that it’s free. You’ll never have to rely on sticky notes again!