In Japanese, particles are like the glue that hold the language together, and for non-native speakers, they’re among the hardest things to master. This app aims to help Japanese language students brush up on their understanding of particles through a series of interactive flash cards and quizzes.

Despite my grandmother’s best efforts, I don’t read or speak Japanese very well, but I did take a couple of semesters in college, so I probably fall into the target audience for this app. Japanese Particles comes with no instruction, so it takes a bit of experimentation to figure things out.

The study cards and quizzes are divided into cryptically titled sections, which I was informed by my Japanese-major brother, probably have something to do with the Japanese Language Proficiency Test, but the naming convention still seemed rather awkward. The flash cards were much better: a sentence example with the particle X-ed out and a handy sound file reading the text for you (still missing the key section). 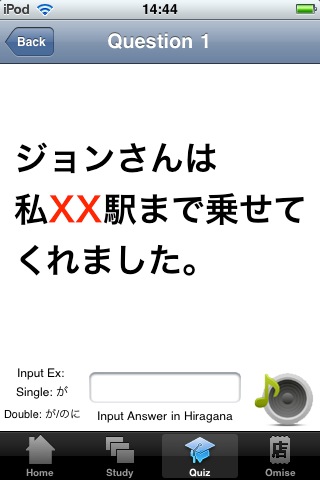 It took me a little while before I figured out that you had to tap the card to turn it over, but once there, in addition to the answer, there was also a “Notes” button leading to a more detailed explanation of the particular particle’s use.

I liked the general interface quite a bit, since the text/speech combination is much nicer than a plain old flash card, but there is way too much kanji in place to make this a useful tool for the beginning Japanese student. Intermediate students will have no problem, since most of the examples used are very basic, but newbies won’t get very far without knowing the kanji. This is a shame, since those are the people who would most benefit from this app.

The quiz section doesn’t have the same kanji issue, as it is entirely sound-based. Listen to the audio track and then select the correct particle form from the displayed options. If you get it right, you’ll hear a very enthusiastic lady cheering you on in Japanese, which I found amusing.

Their “omise” or store seems to be entirely broken, as it takes you to a lovely screen of nothing. The same seems to be true for the little “?” button in the study section, which appears to be attempting to reach the same area. There are also several technical issues that cause the app to crash every once in awhile, and the font choices seemed to be rather erratic.

On the whole, I think it’s a good idea with a ton of potential, but given the high price tag of $5.99, this needs a lot more polish and more cards before it can be a really useful study tool.