Kiss your your unlisted phone number privileges goodbye. NumberGuru has released an iPhone app which lets you perform reverse phone number searches for any number in the US for free. While there are many services for doing a reverse phone number lookup on the iPhone, until now you would have to pay to search and get details on unlisted numbers. Normally services like this will charge you either a monthly fee or a one time fee to reveal the identity of phone numbers that are either unlisted or undisclosed. Now with the free NumberGuru app you can type in any phone number and identify the Name, Service Provider and City of the customer in the NumberGuru database. And the results are wickedly accurate. 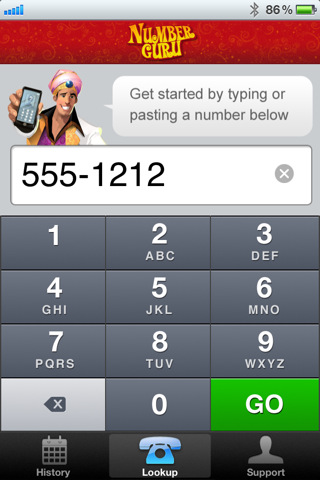 The third test I did was for an 800 number for a toll free number of a known spam caller found at whocallsme.com and unfortunately, Number Guru did not identify the number this time. The app seems to have very little success with toll free numbers in general. Another great feature in the app is the integration of Spam Score, which pulls in comments from sites like whocallsme.com from around the web into the app. You can even type in your own comments on a phone number and mark it as a Spammer for others to see.

The last one was a mobile iPhone number for ATT with unlisted number turned on, and amazingly, NumberGuru returned the name and carrier of the individual, along with the location. This time however the carrier was not correct, although the other two pieces of information were spot on.

The app has a feature that can look through your iPhone contacts and find out the information about the phone numbers you have, if you allow it to do so. The history tab keeps a list of the lookups you’ve performed. Once you find a result you can either add the number to your iPhone Contacts app, or call/text the number directly from NumberGuru. 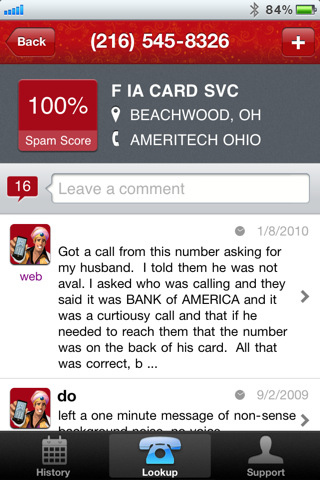 In short, you need to get the NumberGuru app. As always the app makes you agree to the “as is, no guarantee” terms before use, so take that into account when viewing the results. It just plain works and will give you the info you want without having to pay a search fee. Use the NumberGuru app to reveal the identity of unsolicited spam callers. I also recommend looking up your own phone numbers to find out what information is available about you to the public now, thanks to this iPhone app. Now maybe a good time to call up your phone company and stop paying those “unlisted number” fees. The NumberGuru app is also available to Android users.