Soccer fans around the world are eagerly awaiting the start of next year’s FIFA World Cup to be held in South Africa. Now with the help of ESPN and their iPhone app you have access to a ton of information about the tournament and the 32 countries that will be represented there in the Summer of 2010.

The ESPN 2010 World Cup app gives you a live clock counting down to the start of the first game in 2010. The main homescreen shows your favorite countries which you can select, with random quotes about the World Cup, News, Fixtures & Schedule, Venues, Tournament History, and a Bracket Predictor. The bottom of the page has a convenient live news ticker with breaking headlines regarding the upcoming matches. 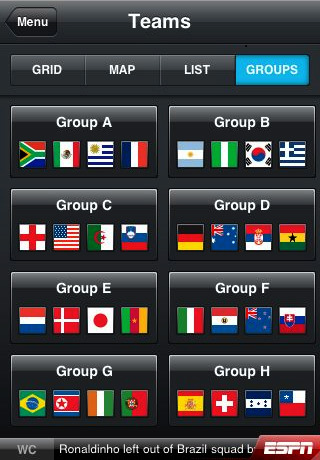 See all the teams playing in 2010 sorted by Flag grid, alphabetical list, or by groups A through H. See a breakdown of the 8 groups, with specific details on each country. Drilling down to any country will show the summary, and you can view News, Players, and Fixtures for the 2010 World Cup and International Friendlies. Player pages start with an overview and also provide a bio page, player logs, and player stats including things like goals scored in each Cup.

Wanna learn about the Venues in South Africa? Browse through the 10 stadium profiles and find out facts like year completed, cost to build the stadium, capacity, trivia, home to team, and a full overview. Looking to relive some of the past 18 Tournaments? The Tournament History section lists all the past 18 World Cups including the winners, teams involved, and fun facts like notable absentees, surprises, trivia, and innovations. For example did you know that during the 1958 World Cup in Sweden, Turkey withdrew from qualifying after refusing to be included in the Asian group? Finally if you want to try your hand at some fun fantasy prediction, use the Bracket Predictor section of the app to vote for your choice of winners in each round.

If you have an iPhone or iPod touch and are planning to either attend the 2010 World Cup or watching a lot of the games, the ESPN 2010 World Cup app is a wonderful value added companion.