OmniFocus is an iPad app from the Omni Group for creating vector drawings. If you have been using a Mac, then most probably you are familiar with OmniGraffle: it is Mac’s premier vector and diagram drawing program, much akin to Microsoft’s Visio Program. But the comparison stops there: What makes Omnigraffle (in my opinion) far superior to Visio is its ease of use, and its dedicated portal of Omnigraffle stencils (via Graffletopia) that provides virtually every kind of stencil or template that you could think of. This extends OmniGraffle’s capabilities beyond measure. You can use it to make detailed website design mockups, from software UML charts to simple floor plans of your next DIY remodelling of your living room. And again, due to Graffletopia and its ease of use, you can do both at the same time, or switch between simple projects to more complex ones. Oh I know what you are going to say, “Hey wait! This is an iPad software review section, and not a Mac OS X software review section!” 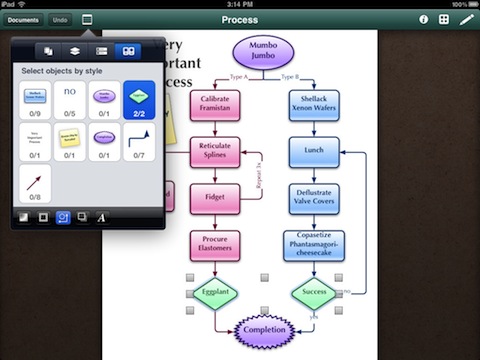 But that is just it: how good is the OmniGraffle for the iPad? It is every bit as good as its big brother counter part, and maybe even better. Better? How can that be? Let me explain further. OmniGraffle for iPad has all the benefits of its big brother counterpart. Upon opening the app you get to see all your diagrams / documents, much like the iWork suite. Upon creating a new document or editing an existing one, you are presented with a clean interface. Clicking on the “stencil” icon shows a preset list of stencils that you can use. Hey those are just a few stencils? I thought it was as flexible and as good as the Mac version? Yes it is, because the search functionality on top is actually connected to Graffletopia; You have access the hundreds of available stencils in Graffletopia and download it straight to your iPad (internet connectivity needed of course). This extends the software’s capabilities to new heights, much like the Mac version. How is OmniGraffle better on the iPad? Thanks to the redesigned UI, OmniGraffle is completely touch friendly. This means you get to make the application do what you want without struggling with it. For example you can connect two drawings or objects an add text with just your fingers. The app is is stylus compatible. I have a Targus stylus for the iPad, but I found that using the application with my fingers to be more effective. Kudos to the Omni Group for its exemplary application design; in short, “it’s magical!” 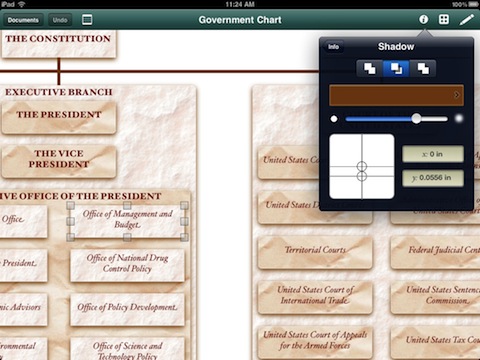 Standard sharing / printing capabilities such as iTunes file sharing, copying / saving to iDisk and on a WebDav server and emailing your document are all present, and the documents can be saved / printed as a PDF, an OmniGraffle document and as pictures in your camera roll. Also, taking cues from Mac OS X Lion (or maybe its the other way around) documents and its changes are automatically saved locally. Even after the application crashes (which in my experience is primarily due to my fault, since I’m a multi-tasking freak), you will be relieved to see that all the changes that you have made are saved automatically, which is very good.

OmniGraffle document? Yup, you heard right, and it is compatible with its big brother counterpart and vice versa; this means that you can do that big and complicated document on your Mac, transfer the file to your iPad (or transfer the file to your WebDav account), add the final touches to your document on the go, then pop in your AV iPad connector and start projecting your document to your dedicated audience! (yes it is compatible with Apple’s VGA Adapter, but its the only one I have so its the only one that I have tested it on) Once completed, do the changes on the go, then transfer file back to the Mac. That’s both productive and very convenient! Also, due to iOS 4’s copy and paste functionality and multi-tasking, you can create the diagrams / images in OmniGraffle then “copy the image / diagram” to the program you want to use it on (say Keynote). 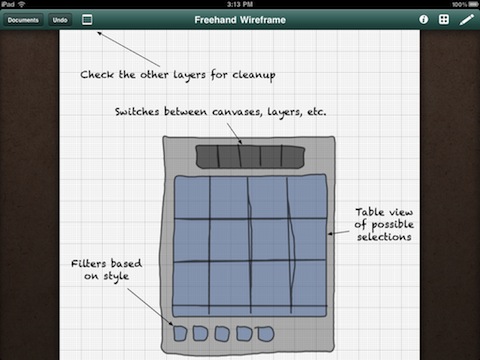 But as good as it is, it still has some flaws. First, it has no “syncing” feature via a Desktop Client or anything of the sorts, much again like the iWork software. This is a much needed feature for obvious reasons. Most softwares / applications get around this feature by giving you access to files stored in your Dropbox account from the application. Sadly, there is no Dropbox integration in OmniGraffle. WebDav is good, but very few online cloud storages offer WebDav, and most costs a monthly subscription fee to use. In actuality, this should post no problems, but due to the high price tag of this software (priced at $49.99) most users wouldn’t like to pony up the added cash just for the WebDav storage. I have also encountered an issue when exporting multi-canvas diagrams into pictures: only the first canvas is exported. I am not sure if this is hardware-related since I am using 1st generation iPad. Having the ability to export all canvases to pictures would be nice. Lastly, though the software is indeed integrated with Graffletopia, some stencils are not compatible with the iPad OmniGraffle. It would be nice to have a filtering system within the app or Graffletopia that would allow iPad users to download only iPad – compatible stencils.

Final thoughts: the OmniGraffle is a brilliant application, which is just as good if not better than its Mac Counterpart. However, lacking some essential features (that should be a standard feature) coupled with its high price prevents this application from being a grand slam winner. It is still a must-buy, if you have the cash though.