Vocal is a new app for controlling your Mac computer from your iPhone 4S using voice commands. Besides the glue factor, Vocal by itself doesn’t really offer anything especially unique, since all it does is send commands to your Mac to do a limited number of tasks, which don’t really save you a lot of time or effort. It is neat to not have to touch your computer to do things like search for things online or open up files on your computer. You will need to have an iPhone 4S for this to work because Vocal piggy backs on the new Siri dictation keyboard built into your iPhone 4S. After having used this app for some time, I’m really hoping that Apple adds Siri to the Mac soon, which will really make things more efficient. Having to use an iPhone to send commands is fine, but you always have to keep opening up the Vocal app which becomes cumbersome.

You’ll need to install the Vocal Mac App which serves as a listener on your Mac. The app finds your computer using Bonjour and asks you confirm a 4 digit number to authenticate and connect the two together. The setup is quite fast and painless, I have to admit. 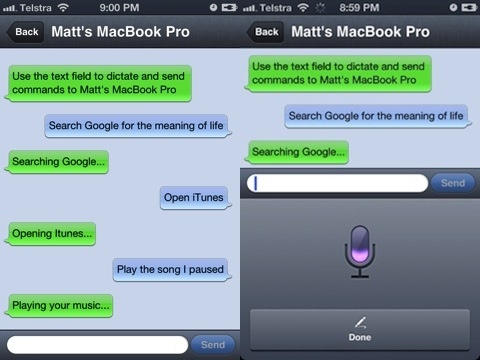 Once you’ve setup you can start sending out commands to your Mac. Out of the box the app comes with a few built in commands and you can add your own too. You can search websites like Google and Amazon by default, search for files using Spotlight, send out new Text Tweets, Fire up a new email message, look up words in the dictionary, and a bunch more. The Vocal companion app also lets you define your own shortcuts if you wish to get more creative with the app. With these custom shortcuts you can also plug in various modular bits and pieces to create dynamic commands. For example I’ve created a shortcut that opens up the AppSafari.com homepage when I say the command “home”.

Here are some of the commands you can either type in or say using your 4S dictation keyboard:

Music with iTunes
open iTunes – runs iTunes, need to do this first before playing music.

play song This Love – This is cool, but there are lots of little quirks with it. First you actually have to remember song names, not sure how many people know all the song titles in their library. Most song names are not easy to dictate. If you’re already playing a song dictation gets super unpredictable with the background noise. Also if there is more than one song with the same name, you get the first one. Finally, the song names have to match exactly. It would be good if it was able to find songs by partial matches.

Websites
search amazon for [something]
search for [some phrase] using google

Using it to run Mac Apps
define [a word] – really cool, opens up Dictionary and finds your defintion
search for [something using Spotlight]
tweet [this is really cool]
print this page
compose a new email
create a new document
select all the text

I have to admit, there isn’t too much practical day to day use for me personally using this app, but it sure is pretty cool and a fun idea. You may find that you can use it more effectively yourself. For people who maybe physically impaired and or not able to actually type on a computer for some reason, this app could be a life saver. Spend the 2 dollars if you think you will be using this app often, and only if you have an iPhone 4S and a Mac.