In a time that is all about interacting socially online, 6 Wunderkndr GmbH has created an iPhone app that allows you to be organized while doing so. Wunderkit was created to simplify organizing and planning and find a way to connect the social world at the same time. By having three built in apps, Dashboard, Tasks and Notes, you can create your own workspace to utilize these tools and have all of your projects in one place. Each workspace represents a different project. The greatest part about Wunderkit is that you can add various people to your workspace. By doing this you can have a workspace for your company, family or whatever you may need, and share tasks as well as notes in a simple way.

The Dashboard section of the app allows you to follow different feeds, very similar to twitter, and keep up to date with what is going on. The purpose of the Tasks section is to create a to do list, with a feel familiar to Wunderkndr’s app Wunderlist, allowing you to keep track of everything that needs to be done. It also allows you to add these tasks to a calendar. Lastly, the Notes area is an easy way to communicate and record input or thoughts. 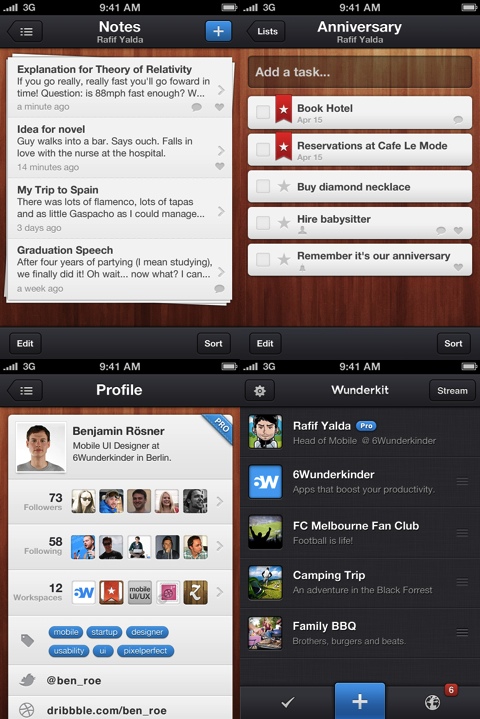 Wunderkit is supported by iCloud allowing everything to be in sync. You can access it either through the app or via a computer. When signing up for Wunderkit you will be given the privileges of a pro account for ninety days free. After that you will become a free user. The main difference between the pro and free version is that a free account does not allow you to interact with workspaces that you did not create or have not been invited to. To purchase the pro version it costs $4.99/month. One of the greatest things about Wunderkit is it is completely free of advertisements; regardless of if you have the free or pro version. Since it is currently in the beta stages, Wunderkit’s staff is very proactive and willing to listen to any input or problems that may be arising. A smart feature Wunderkit has is that it allows you to link your Facebook, Twitter and LinkedIn accounts to make it easier to find friends.

As with all apps in the beta system, Wunderkit does have its downsides. For starters, users who have already been using Wunderlist must make a new account for Wunderkit. You are also not able to find other Wunderkit users by searching their email. In order to find another user you must connect with them by linking your Facebook, Twitter or LinkedIn account or by searching their name. Also, if you are an iPad user you must use the iPhone app since an iPad version has yet to be created. Since Wunderkit is still in the beta stages, they will hopefully add the ability to attach documents to the workspaces. This would give the app much more potential for professional usages. Also, the addition of a calendar app to be built in, especially if it could sync with other calendars, would further augment the possibilities this new program offers.

Overall I give Wunderkit four stars, with the potential to earn five with some new additions. The layout and capability of this program could help redesign how we organize and plan both our social and business lives. Wunderkit is available in the app store for free, or you can also begin using it online at wunderkit.com