Like it or not, the landscape of books is changing, and changing fast. With the advent of eReaders and electronic books, everyone from publishing companies down to the readers are affected. Not suprisingly, some people have taken the idea of a book and adapted it for a new medium: Apple devices. Forget about having just print–Byook has taken advantage of iPhone’s penchant for high quality graphics and combined them with a classic from Sir Arthur Conan Doyle, Sherlock Holmes: The Adventure of the Speckled Band.

In this tale, John Watson recounts the tale of a young woman haunted by suspicious happenings and a threatening stepfather…all strange enough to attrack Sherlock Holmes’ considerable attentions. Along with Sir Arthur Conan Doyle’s original engrossing text, Byook enhances the reading experience by using animations, sound effects, and illustrations on all 100 “pages.” You have the option to turn down the sound and music, but I highly recommend that you keep them on. In fact, plug in headphones for the full experience–you won’t regret it. Turning the pages is as simple as swiping right to left (but make sure the animations are done before doing so), and tapping anywhere on the page will bring up an options menu, where you can adjust the volume or skip pages. 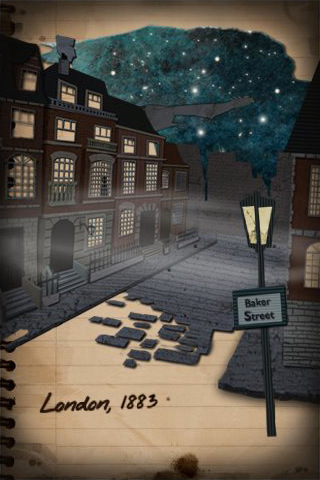 Byook’s version of a Sherlock Holmes’ novel is absolutely gorgeous. Everything, from the style of writing to the sepia-toned pages to the crackling fireplace as a background noise, evokes an antiquated sense of days gone by. The effects are extremely well-done, and I’m impressed by the amount of detail that obviously went into the illustrations and animation. The only thing is, having so much go on in an app really slows things down–for example, I find myself unable to “turn” the page until the set animation has run its course. It doesn’t take very long to read a page, and having to wait to read the next one makes me unhappy; however, if you’re one who doesn’t mind being dazzled by whatever the developers have cooked up for each passage, then waiting will be a delight for you. 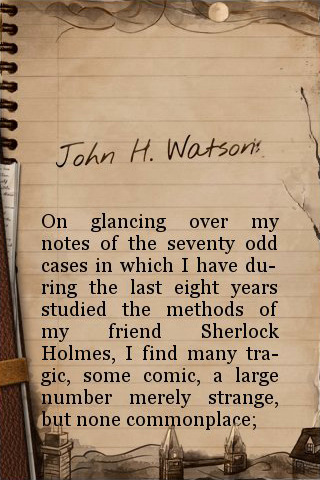 Aside from the lag, Byook has most definitely succeeded in creating an atmospheric reading environment. Instead of being distracting, the extra sounds and movements usually complement the book. Be aware, though, that this is only Part One of this book; the next installment is coming soon. The question I have is, when it does release, are users who already own the app going to receive it for free as an update? This is not addressed in either the blurb in the AppStore or on Byook’s website, but prior experience says probably not, so be prepared to possibly shell out more cash for more books as they come. There is no doubt that this is a beautiful rendition of an old classic, but are you willing to pay for it?

Update: The second part will be released on the App Store within two weeks as an update, thus requiring no extra fee for the readers.