Liike for Facebook with Chat is a universal Facebook App, (buy once and use it on your iPhone or iPad) that is actually really cool. A lot has been said lately about the decline in Facebook registrations, or the fact that Apple and Facebook might team up for a native Facebook app in iOS5, but for now some 700 Million Facebook accounts need to be accessed some how. So you have the free Facebook app on your iPhone, why should you get this app? 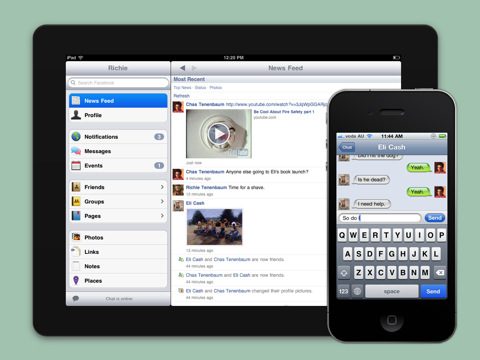 As a concept, an app for viewing your beloved Facebook stuff is nothing new, but as for an app that you are actually happy to use this one definitely stands out. I started my Facebook on iPad experience as a friendly for Facebook user, but Social Networking is something that is fun for me and that app just didn’t add any value in that respect, so my search for a better one has been ongoing since. By contrast Liike for Facebook with Chat is bright, none of this boring dull blue that a lot of other apps insist on using, and all of the options, which incidentally are so clearly laid out and accessible have a very colorful look about them.

These Options are listed on the left of the screen, and unlike in some apps they are also labeled and there is no problem with having to tap on multiple icons (because you cant remember which does what) to get to the view you want. They are also grouped together to simplify your life, something other Facebook apps for iPad forgot to consider. You can also change your news feed options, select from Most Recent, Top News, Status, and Home – no more having to return to the home screen to navigate to another option.

Even more importantly for the efficient Facebook user, Notifications, Messages and events are clearly updated with a simple number showing you how many of each you have received, a simple tap lists them, and older ones, with links that take you directly to the event. Depending on your country, you can even direct your alerts to your mobile by SMS. 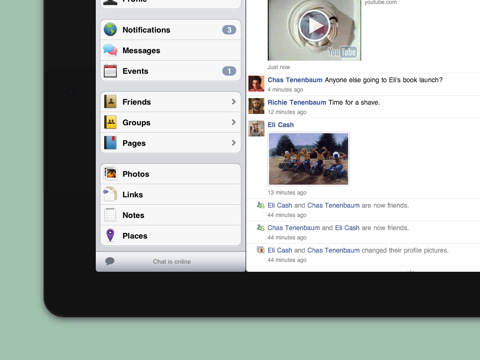 Viewing YouTube video from your feeds is as simple as clicking on it, just as you would in a web browser, viewing images is just as easy and a single tap displays the picture on roughly two thirds of the screen in portrait mode. Viewing or adding comments, giving it a Like, or even tagging is done right there, if you fancy a look at the rest of the pics in that album it can be done from there too. As the name of the app implies, chat is nicely integrated and easily accessible.

This app definitely has its short comings, but the developers are not afraid to update and improve it.
For example you cannot upload pictures, for an iPad user this is really not the end of the world, but I can see how it would be a real pain for iPhone users wanting to do a quick share through the app. Another feature I would like to see is the ability to easily switch user accounts, something like friendly for Facebook offers.

If you jump on to the appstore and look at the top Social Networking apps, you wont see it listed there in the top 10 but I am sure it is just a matter of time before it does because it is far better than many of those listed there. I do have my eye on another Facebook app which may soon rival Liike for Facebook with Chat, but its currently twice the price, and not as polished.

Its current appstore rating is 3.5 stars, but for $0.99 I feel it deserves better than that. Its handful of minor omissions does however prevent me from giving it 5 stars.