Paper plane-building is a classic symbol of bored students, but most have never moved passed the basic Arrow design. John Collins is not one of them. Known as “The Paper Airplane Guy,” he has won awards for his paper airplane designs, 15 of which you can now learn thanks to Tim Martin’s app, The Paper Plane Guy’s Construction Kit!

In the Hanger (first tab), the 15 designs are separated into three types: Dart, Glider, and Specialty. Tap on the info button at the corners for more background on the types, or just tap on an individual airplane design to start folding (the difficulty levels are clearly stated below each one). Each step has its own screen; swipe your finger across the screen or move the slider to go through them. To access the legend for folding marks on the diagrams, just double-tap the screen. If you need to make notes for yourself, just tap the pencil button on the top right. 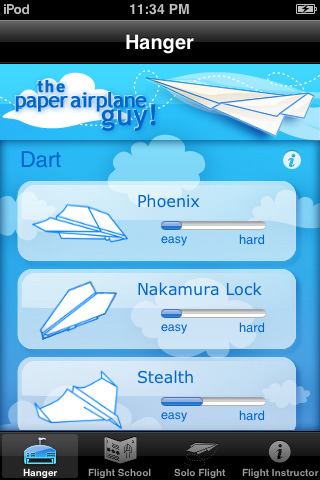 The Flight School tab houses plenty of tips for Basics (types of folds), Folding (textual instructions), and Trim/Flying (actual flight). My favorite one is Basics, hands down. Once you choose a fold, you’re taken to a screen that will show you, with a slider and moving diagrams, just how to make it. The diagrams are like real-life simulations, and you can slow them down as much as you want to catch every detail. The Solo Flight tab features a Throw Simulator and FAQs. Practice your paper airplane tossing abilities with the Throw Simulator, and it will tell you what you’re doing wrong, then check the FAQs for more detailed explanations.

The Paper Plane Guy’s Construction Kit! is an awesome, if fairly nerdy, app to own. Packed with tons of information using both technical jargon and slightly ridiculous acronyms, it’s bound to appeal to artists and scientists alike. The Throw Simulator, which utilizes the iPhone’s accelerometer to judge one’s toss, is especially neat, as are the moving fold diagrams–no more trying to decipher confusing static pictures (often a point of frustration for origami enthusiasts)! Obviously, you wouldn’t be able to use this app for a quick thrill, but it turns a lost art into something accessible and genuinely tries to help you accomplish building something, even encouraging you to design your own. At $3.99, you’re definitely paying for such knowledge, but how many people can boast of having it nowadays?

Update: Now the folding diagrams are flipbooks. Those complicated origami folds are a piece-of-cake now!