Technology continues to blur the lines between reality and imaginary everyday, especially with the latest 3D craze. You can’t turn around without encountering a movie that boasts of having 3D animation (even if they really shouldn’t be). It’s also seeping into the AppStore–after all, an iPhone or an iPod Touch is a perfect medium with which to carry out 3D aspirations. Unfortunately, these can be hit-or-miss as well (more often the latter).

The Amazing3D! app, developed by sazanami, attempts to blur those lines by inserting 3D character into real-life backgrounds. To get started, choose Sets under Quick & Easy to get a feel for the app, then tap to choose between Nobikuma, Kinako, and Items (personally, I think Nobikuma is the cutest thing alive). Then choose a background for your character to appear in. The app will then demonstrate how to go about creating a 3D grid, which is important as it influences the way the characters will appear onscreen (height, depth, etc.). Once that is done, you can have fun by poking the characters and watching their actions. 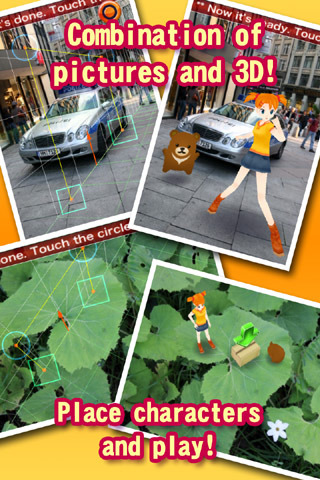 To edit, tap the screen for a green arrow button; tapping the button will bring up a menu. The first two (arrows pointing left) lead you back to the home screen and the AR viewing screen (where you create the 3D grid), respectively. The next buttons are: Move, Add, Picture, and Save. Tapping the Move button brings up another menu, whereby you can further edit the characters’ size, height, and rotation. Before you edit, however, make sure you’re changing the right onscreen character. Each scene can have up to 3 characters and 10 items; all instructions can be seen scrolling at the top.

Once you’re comfortable moving around the app, you can start using your own photos as backgrounds (under “Advanced”). The hardest part for me was making the 3D grid in the AR viewing screen, but you can always go back to it if your characters aren’t being placed the way you thought they’d be. You can save your finished product as a photo or a movie and email it to everyone, as well as posting it on Twitter.

Amazing3D! is an awesome melding of fact and fiction, perhaps the best that I’ve seen thus far. The characters are adorable and quite varied in actions, which the developer promises even more of in future updates (both character- and motion-wise). More importantly, the 3D effects are excellently rendered, especially with the option of creating your own 3D grid. The only complaint I really have is with the scrolling explanations at the top: surely there is a better way to describe what the buttons do. I’m more liable to try out the button impatiently than wait for the description to show up. The English could also use a good editing, but it’s not incomprehensible. As it is, Amazing3D! is a fresh, surprisingly fun way to be creative, and would be completely worth a try, especially when they update with more characters.

Here is a video demo of the Amazing3D! app on the iPhone