Ideal Binary’s release of Grimm’s Rapunzel – 3D Interactive Pop-up Book couldn’t have been more well-timed, what with the recent success of the Disney movie, Tangled. With this app, people can now experience the fairy tale Tangled is based on in interactive book format The book is available in English, German, and French, both narrated and written (tap the blue globe in the bottom left corner to switch languages). Choose between reading to yourself and narration in the main menu. 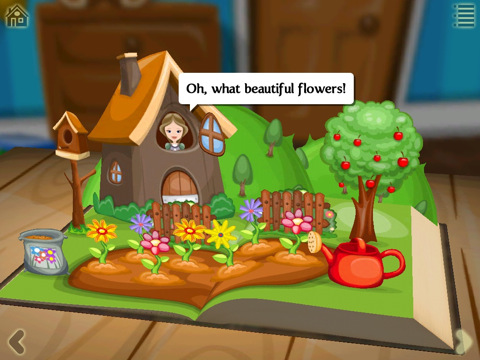 Interspersed throughout the 30-page book are 9 double-paged interactive 3D pop-up scenes, where you’ll have to perform tasks to move onto the next page. Those who are too impatient to do so, however, can use the left and right arrows at the bottom corners to move past them and continue with the story; another way to skip around would be by accessing the table of contents in the upper right corner. All the pop-up elements in the 3D pages can be manipulated by touch somehow, accompanied by a sound effect. The interactive pages are also amenable to shifting slightly in orientation–just tap, hold, and drag your finger to move the book around to view the pop-up scenes in a different way. 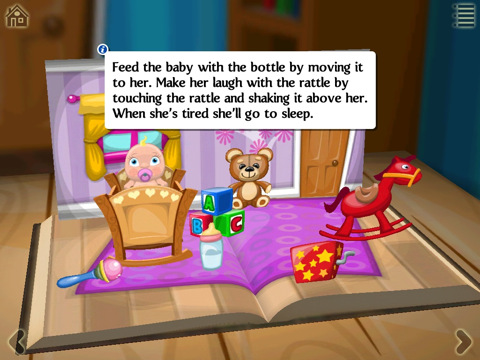 This book app version of Grimm’s Rapunzel is perfectly suited for small children who are comfortable or becoming comfortable with reading: the illustrations are bright and colorful, and the text is beautifully rendered and supplemented by medieval-esque garnishing. I find it odd that such an app doesn’t feature individual word readings (where words can be narrated just by tapping them), though. Adding such a feature would boost the education value of this app, I believe. The pop-up pages are fun to explore, and will hold your child’s attention just fine throughout all those pages of text. The music playing in the background is suitable, and although the voice actress is a bit more modern than I’d like for such a story, I had no trouble understanding her or her nuances. The only major problem I have with is mostly semantical–Grimm’s fairy tales infamously have dark undertones (a little like the anti-Disney, if I may), and the story in this book app is nowhere near dark or twisted. It is the highly edited version of the original Grimm’s Rapunzel, and I am slightly taken aback that the developers would even mention the Grimm name in the title, since it is not, as a matter of fact, their version.