Grimm is a new iPhone game from ROBOX studios (creators of Adult Swim’s Orphan Feast) featuring a dark themed pram that must be routed through a series of obstacles filled with freakishly original black & white artwork. Grimm’s dark sceneries are somewhat reminicent of LIMBO on XBOX. So what’s with the stroller you ask? It seems a mother has accidentally abandoned her stroller on a train platform. Out comes Mr Grimm and he follows the squeaky baby carriage, haunting him along the way. You have to go forth and survive Mr Grimm’s evil attempts of wiping out your baby. Stages are padded with notes and instructions in form of poetry. 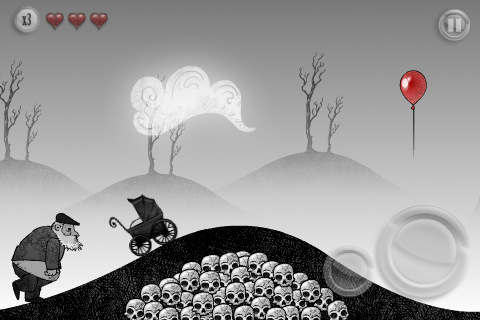 Gameplay involves physics controls (tilting right/left) for movement along the platform, and two buttons, one for jumping, and another for braking. Your pram contains a baby that you can throw at obstacles along the way. Yes that’s pretty weird having to throw a baby, but that’s part of the Grimm game. But you can’t leave the child behind. He has to stay in your pram as you move forward, so you go and pick him up after a while and he gets back into the carriage. Other cool physics based tricks are elevators that require you to jump up in order for them to go up, and obstacles that you can push around to create ramps for you to jump over. Keep in mind that there is also a time limit per stage. 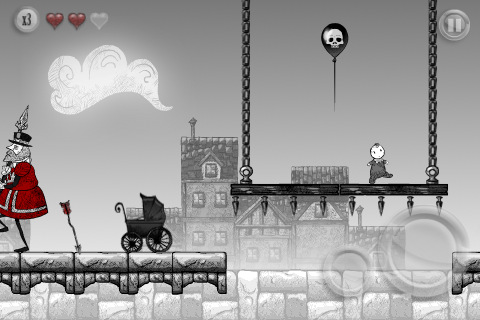 Grimm has a total of 10 worlds and 8 mini-levels, all filled with morbid characters and objects for you to kill. You get 3 lives per game. Picking up baby bottles along the way restores one life. There is an entertaining introduction stage to get you warmed up. The only recommendation would be to have an options menu where you can control the speed of the game, as it can feel a little slow at times.

Overall, Grimm is an exceptionally well made game with a hint of dark humor and original content. Grimm dares to go in a new direction with physics based platformers, and comes out with a winner. Super addictive and engaging game that’s worth every penny.