Construction Chaos is a physics based game by Big Dot Productions where your purpose is to move small shapes into certain arrangements in order to fit them inside the larger outline of another shape. The smaller shapes are personified with eyes, and then a mouth appears when you attempt to move the shapes with your finger to their desired destination. The pupils of the eyelid also move in the direction that you are moving the shape. A red dot appears on each shape when you attempt to move it to show which point on the shape you are pulling from. Pulling from the corner will obviously result in a different type of movement than pulling from the center.

In case the open mouth and pupil movement were not enough to properly designate that you are moving the shapes, they also make a sound that is sort of a mix between a donkey and a squeaky horn every time you touch them. The sound effect can be disabled in the options section of the game if this bothers you. I turned it off mostly because I felt like between the distorted look on the shape’s face and the awful sound coming out of it that I was hurting it somehow. The background music itself is pretty unobtrusive- I didn’t mind it. The backdrop to the shape configurations is really simple- the ground is a green line on top of a brown line (grass/soil) and behind the shapes is a light blue sky with clouds scrolling slowly across the screen. 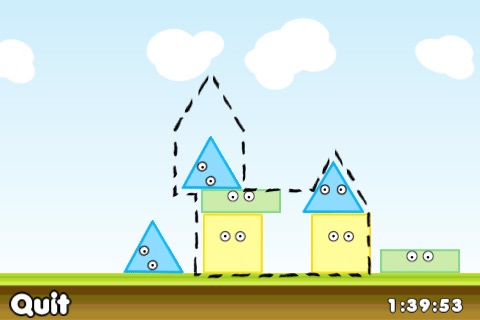 There are no real bells and whistles to this game- the options section only allows for the music and/or sound effects to be turned on/off, there is a high scores section that only keeps a log of the respective time that you finished each level in, and then the game part itself that has eight levels each in easy/medium/hard modes.

My biggest problem with the game is that the shapes themselves are difficult to move- they seem to be either too responsive or not responsive enough to my touch. I would either hardly move them at all or throw them across the screen accidentally. Also, you have to get the shapes inside the outline absolutely perfectly before the game will advance you to the next level, which is really hard to do (even on easy mode). If some fine-tuning could be done in these areas, the game would definitely be more fun to play. And I would feel better if the shapes didn’t look and sound so upset when I move them. I would prefer a smiley face and a “wheeee!” sound, so I could feel like the shapes and I were having a good time together.

I think this game would be most enjoyable for a patient person who likes a more slow-paced puzzle type game. If that sounds like you, then absolutely spend the $0.99.