I’m sure some of you are out there playing music games on your iPhones and thinking, “These games are great and all, but they need more ROCK!” Well, Likwid’s got you covered. With gameplay basically identical to Auditorium and Genesis, you manipulate streams of colored light to activate various music nodes, except you can forget about the pretty planets and ethereal music; you’re here to ROCK! *cue “lazer” beams and smoke machine*

Likwid brings exactly zero innovation to the game mechanics, but their twist is a “freemium” model that gives you the game for free, but lets you buy levels of songs you already know and love. The basic game is really more like a demo. You can play through various levels designed to let you get the hang of the controls. You encounter various tools to help you twist and bend the light streams to light up all the targets. The game is silent until you light one up, and the more targets you light, the more instruments you hear, and the more complex the track becomes. The levels aren’t generally very hard, but they do require some creative thinking and occasionally a little patience. 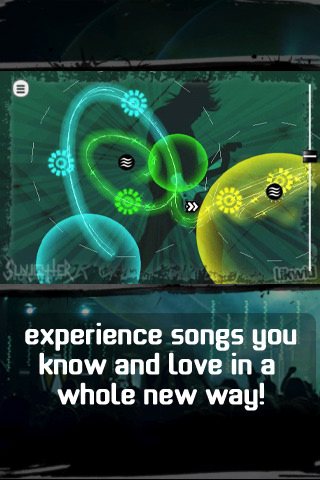 I might have been impressed if I’d never seen anything like it, but this is clearly an inferior Auditorium clone. The graphics are very Rock Band or Guitar Hero-inspired and way on the cheesy end of the spectrum. The gameplay itself isn’t too bad, but the levels take a long time to load, and the additional content seems expensive, at $.99 per song for five short levels. Plus, the store offerings are extremely limited, and very rarely would you ever be stuck on a single level long enough to listen to an entire song. The basic content is rather more comprehensive than the free versions of Auditorium or Genesis, but you’re essentially getting a longer tutorial at the expense of graphics and music.

Overall, I found Likwid pretty disappointing. They took Auditorium’s sweet game mechanic and just punted the lush music and sleek design sensibility that made the game great. The overall effect just screams lousy copy. I can appreciate what they were trying to do, but, sadly, you just can’t play rock, paper, scissors with only rock. Save your money and get Auditorium instead.