Boggle-clone lovers rejoice! Word Scramble 2 is here to satisfy all of your word searching needs! From Zynga, the social gaming giants responsible for Farmville and Mafia Wars, Word Scramble 2 aims to do what pretty much every other Zynga title does, which is make a close copy of a different game and bring it cheaply to the hordes of slavering masses.

Regardless of how you feel about Zynga as a company, I will say this, they’re pretty good at what they do, and Word Scramble 2 is no exception. It plays just like Boggle; you have a random grid of letters, and you have to make words out of them. All the letters have to be connected in a line, but you can go up, down, left, right, or diagonal. As far as I can tell, this version is exactly the same as the first, but they’ve added trophies and sharpened up a few of the design elements. You can still play on Facebook, in addition to solo mode and a play and pass mode for when you have friends actually in the room with you. 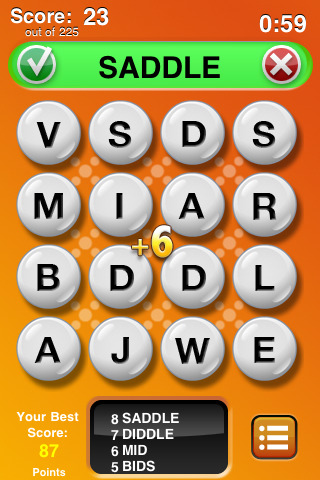 I’m not wild about the trophies, since they don’t really add anything, and most of them don’t really feel like worthwhile achievements, but if you’re the type who loves to compare progress with your friends on Facebook, they’re there for you. I’m also not a big fan of their word bank, since it encourages people to just enter in anything that vaguely looks like it could be English. A ton of the words the game considers valid would be considered seriously suspect by even the most liberal of linguists, but it’s a fairly minor gripe.

The design is fairly generic, and you can play to unlock “Scramble points” to change the background if you want, but it’s a really trivial feature. The sound effects are decent, but like everything else in the game, they can be buggy from time to time.