Room escape games are a special weakness of mine. I’ve been known to stay up until the wee hours of the morning playing them, and it doesn’t seem to matter if they’re impossibly hard or even in a language I don’t understand. I’ll just keep banging my head against a puzzle until it breaks (or cheat and look to the Internet for help). Sometimes I’ll even do this if the game is flat out terrible, I’m ashamed to say. I’ll have one of those moments where I just KNOW it’s going to end badly for me, because of broken puzzles or lousy interface, but I still keep playing until my brain aches and my eyes are glazed over. I tell you all this so you’ll understand what I mean when I say that I wanted to give up on Escape The Room during the first room.

Escape The Room isn’t the worst room escape I’ve ever played, indeed, far from it. The graphics are actually remarkably polished, and the interface is generally quite clean. Escape The Room didn’t have any really unforgivable flaws, but it had so many small ones that the game became practically unplayable for me. 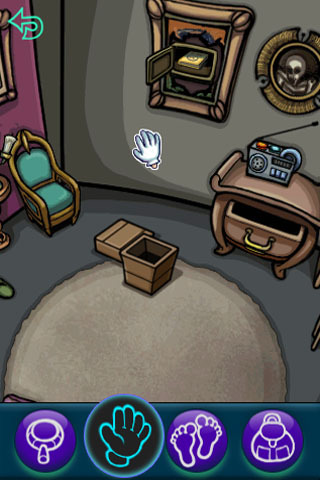 The biggest issue is the touch controls. They’re wildly unpredictable, especially when trying to use items. It’s a very particular kind of torment when you’re trying to line up the end of a very small key with an equally tiny keyhole. The second biggest issue is the pixel hunting combined with the game’s habit of telling you every time something doesn’t work. Because the cursor doesn’t change when you’ve found something you can interact with, all you can do is blindly click around, and the game will helpfully announce “You can’t take this” or the like. EVERY. SINGLE. TIME. It might not have bothered me if the message were discreet, but you always have to tap through to erase it. In fact, most of the interface was plagued with an excess of tapping, including a few of the puzzles.

A tutorial or at least some better instructions would also have been welcomed, especially for a few of the more mystifying mini-games, but after seeing the flurry of typos and impressively awkward English in the game dialogue, I’m not convinced the developers would have been able to manage that much. The story is, as you might imagine, rather thin, but that is usually the case with room escape games.

I really wanted this to be a good game. No, really! If Nate Games could just make their touch controls work seamlessly, I’m sure it would have been love at first sight. I feel certain that room escape games and the iPhone would go together like ice cream and cake, but Escape The Room is more like cabbage-flavored ice-cream.

This 3rd Party App is available at the Apple iTunes AppStore. Browse the full list of all AppStore apps filed under the AppStore category.
Download Escape The Room at iTunes App Store
Price: $2.99
Developer: Website
AppSafari review of Escape The Room was written by Tracy Yonemoto on April 6th, 2010 and categorized under App Store, Games, Puzzler. Page viewed 5780 times, 1 so far today. Need help on using these apps? Please read the Help Page.