You know the saying “Change is good?” Well, in the case of CLUE, that couldn’t be more wrong.

I was surprised to see so many negative reviews in the iTunes store when I went to go download the app. It’s a well-known title released by a big name company; it just seemed unlikely that anything could be so off with such an established franchise, but after playing EA’s creative, um, “reimagining” of CLUE, I can understand why there were so many bitter customers. 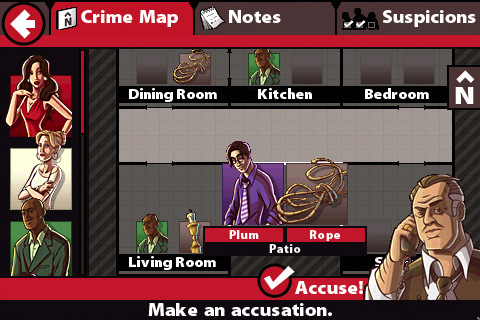 For starters, this it barely resembles the board game we know and love, but you’d never know it from the title. As the official CLUE app, I was expecting a standard board game app in the style of Trivial Pursuit or Monopoly, but this goes a completely different direction, following in the footsteps of a point and click adventure game, only really, really badly.

The characters and plot are basically the same, but this is an entirely single-player game. Mr. Boddy has been murdered by one of the usual cast of suspects, and you are the rookie reporter charged with figuring out who, where, and how. Using a point and click/touch interface, you visit various rooms, questioning suspects or searching the area for clues, but there is little to no direction involved. If you come across a useful clue, it is sheer luck, and because you’re working under an extremely tight deadline, you’ll be lucky to have any facts straight before you’re forced to make an accusation. Every action you take costs time, but you have no way of knowing whether or not an action will be worthwhile ahead of time. There is no logical trail of clues to follow and you aren’t given enough time to systematically eliminate options.

Unlike Nick Chase, a detective game that presents you with well-crafted and engaging puzzles, CLUE randomly throws together traditional CLUE aspects and has you take stabs in the dark at figuring out whodunit. Because all the details are randomly generated, levels can be replayed, but the deadlines are so tight, you’ll probably have to play them a few times before getting lucky. This would be fine if the game were fun, but it just isn’t engaging enough to be worth it.

The art and sound look great, and the interface is smooth and intuitive. On a purely superficial level, the game looks and performs beautifully, which is why it is so utterly mind-boggling that Hasbro and EA could have made such a massive blunder in terms of gameplay. The CLUE app delivers a seriously second-rate mystery game while also duping classic CLUE fans who expected the board game.