There is no other sport as indicative of summer as beach volleyball. If you don’t like the sand or the heat or the clothing, however, you can now satisfy those beach volleyball urges by giving Dardari Multimedia’s sports app, iOverTheNet Beach Volley, a try.

Once you get past the beach bunny in the splash page, you are taken to the main menu. Under the Setup, you can adjust your game view, choose a side to stay on/have set changes, and adjust the game speed. After setting everything up to your needs, you can head on over to Practice & Tutorial. iOverTheNet allows you to have an unlimited Practice round, and be sure to watch the tutorial video (link is found in the upper right-hand corner) if you don’t understand the static visuals. Also in this screen, there are options to toggle Auto-motion and Easy Spike. Turning Auto-motion off will allow you to direct your players’ movements with an on-screen controller, instead of leaving it up to the AI. 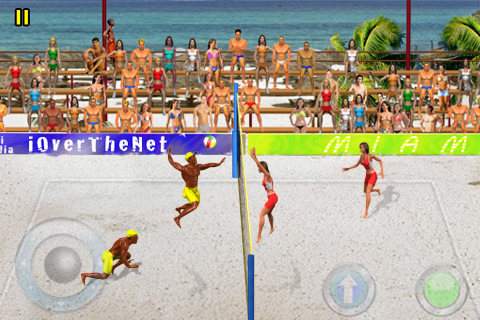 The green button is for saves, bumps, overhand passes, and digs, while the blue arrow button is for jumps and blocks. Spiking is done by swiping your finger across the screen towards the opponents. Once you’re comfortable with the gameplay, you can choose to enter a Single Game or do a World Tour. In a Single Game, you can choose a city and your opponents, whose skill levels are found under their pictures. The World Tour sends you to several games at eight different places with different opponents (of course, they get progressively harder to defeat). Both game modes allow you to choose how many sets to win: 1, 3, or 5.

The very first thing you’ll notice is that it’s very hard to get a decent grasp of the controls. In fact, watching the tutorial is a must, or else you’ll be liable to confusion and button-mashing. (This can be easier to avoid by turning the Auto-motion off, so that you can get a better feel for the controls.) Another hassle is the lack of some sort of “Return to Menu” button once tapping on Single Game or World Tour: what if you change your mind? The graphics are touted as “realistic,” but it’s hard to be very lifelike when the characters are the size of a twig on your screen; others may disagree when seeing the female characters included in the newest update. Lastly, the soundtrack is highly repetitive and fast becomes an annoyance…good thing you can turn it off in Setup.

iOverTheNet is an interesting mixture of old-fashioned arcade-style buttons and high-tech touchscreens, and becomes much easier to manage once you figure out just how to play–it might even be fun. However, it is still quite clunky and will need some serious spit and shine before it can be “realistic” or worth the $0.99.