Captain Glyph is a word game app. by Mars’ Toad where your objective is to arrange the letter blocks that fall from the top of the screen into 3 to 7 letter ‘treasure words’. You use your finger to arrange the letter blocks as they come into the frame, and once you have a word arranged, you scroll over those letters with your finger (words can be formed backwards, forwards, and can be located in rows above/below each other as long as they are in consecutive order). The blocks will be highlighted with a green outline, and then disappear, allowing more space for new treasure words. There are also some non-letter blocks, like the hourglass (gives you a few seconds of pause before the next letter block arrives), and the bomb (allows you a short window of time to pick undesirable letter blocks and blow them up).

There are six different worlds that you will encounter as you move up in levels- I only got as far as The Jungle- but there is also The Desert, Volcano, Ice Cave, Ocean, and Future. There are three levels in each world, so that means you have eighteen different levels to play. In each one, you have a goal to hit before you can move on- you have to obtain a certain amount of “bounty,” or gold coins that you are awarded for each treasure word found. Obviously, the longer the word, the more bounty you get for it. 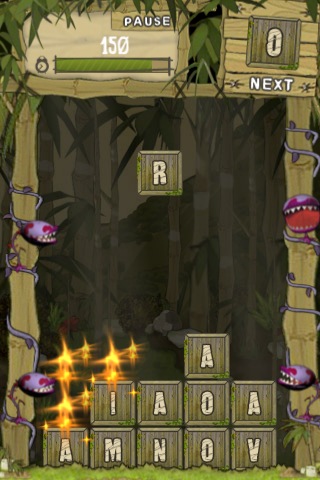 The graphics are cute, and the sounds are fun without being annoying. My favorite part is that after you find a treasure word, yellow/orange sparkles appear where the blocks were, accompanied by chime sound effect.

The app. has a great Help section that gives instructions and tips for how to make the most of the game. There is also the option to play in Free Mode, where there is no time limit or enemies. The downside is that you can only play within the worlds that you have already unlocked in normal mode.

The only thing that I really dislike about the app. is that you can’t move your blocks once you have placed them somewhere. Usually, I have plenty of letters available to make treasure words, but since they weren’t originally situated next to one another, I can’t make any words. I think it would be more fun if the blocks were moveable.

The app. is $1.99, which is kind of a bummer. I personally feel that this is more of a $0.99 game. But it’s simple, fun, and definitely has replay ability. If you don’t mind spending a couple bucks and you’re into word games, I think you’ll really like Captain Glyph.