A long time ago in a galaxy far, far away…

Star Wars fans, brace yourselves, this is an officially licensed product that doesn’t suck! In fact, it’s actually pretty good! So good that even non-Star Wars fans might enjoy it! No really!

Yeah, I was surprised as you were. Just about everything associated with Star Wars these days comes with such enormous expectations, fans of the series are too often left with the bitter taste of disappointment. But not so with Star Wars: Cantina! This is the most casual, but also one of the most charming Star Wars games I’ve ever played. It’s Diner Dash on Tatooine, which works better than you would have ever expected. 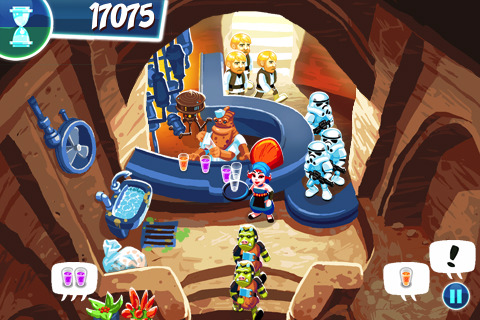 Time management games are basically all the same, so don’t expect any major innovations here, but Star Wars: Cantina manages to pack in a metric ton of story and character. Nia Adea, our fearless heroine, shows up on Tatooine to help her friend Robb pay off a cranky loan shark by waitressing at his Mos Espa bar.

There’s the usual frantic taking orders and delivering drinks, but for the classic Star Wars fans out there, from the moment you first boot up the game and hear that familiar music, you’ll know you’re in for a treat. The customers are all familiar sights: moisture farmers, Jawas, Twi’lek smugglers, Rodian bounty hunters, Stormtroopers, and Hutts, and one of the upgrades is the famous cantina band from Mos Eisley.

The graphic design of the game is exceptional, with cut scenes done in a charmingly illustrated comic form well-suited to the casual nature of the game. The music is great, but a little on the repetitive side, which probably won’t bother Star Wars fans, but it might get annoying for others. To round it all out, the interface is smooth and works great, although the tutorial is a little on the confusing side.

The story mode is actually quite substantial, but if you want more, they also have an Endless Shift mode, and there are leaderboards for measuring your galactic waitressing prowess against others. All in all, it’s a surprisingly solid game. If you’re really into time-management games, you might find this one a little too simplistic, but for the average player, this is a really polished and enjoyable title. And if you’re a Star Wars fan, this should be a no-brainer. Star Wars: Cantina will help you wash the bad taste of the prequels out of your mouth and bring you back to the sheer fun of the originals.