Yes, with your iPhone and wifi, 3G, or Edge Network you can access pictures and interact with all the hot chicks you want 24/7. Why not give your eyes a break and check out Bliss Software’s Hot Chicks: Watch Your Head, a fun little accelerometer game featuring the super cute Chaka.

You’ll play as Chaka and the aim of the game is to prevent her from becoming burnt to a crisp by falling fireballs. Why there are falling fireballs I do now know, but it’s fun nevertheless. The simple arcade game takes advantage of the iPhone’s accelerometer feature. You’ll control the little ball of yellow fluff by tilting your iPhone left and right to move her left and right, respectively. Last as long as possible and you’ll gain points for both time and distance covered. After you lose a game, submit your score to online leaderboards via integration with OpenFeint. The game becomes very addicting because you’ll strive to last longer in the game so you can unlock different achievements. 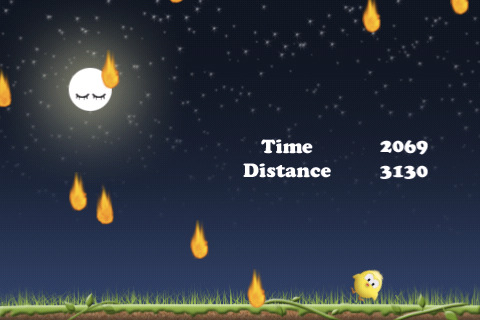 Hot Chicks is fun, simple, and straightforward. The concept is far from original–lasting as long as possible while avoiding objects is the object of many games (Space Raider and ST Action Pig to name a few). But it’s easy to just pick-up-and-play and who doesn’t love a little fluffy chick? It chirps at you and waddles back on forth! That alone gets points from me.

Controls are also easy to use. The simple tilt controls make it easy for children and adults to play. The physics engine is spot-on and Chaka’s speed changes depending on the amount of tilting. The game is also very intuitive but if you need help there’s a handy-dandy, animated tutorial with happy piano music. I’d like to see developers add a touch control option so users can have their pick of tilt or touch controls. It would be great if a pause button and autosave feature were added too. I just can’t imagine sitting and playing for hours on end without being able to go on a bathroom break.

Audio and graphics are where the app really shines. The app is colorful and there are animations on every screen–play, option, help, and info page. Even the smallest blade of grass and tuft of hair on Chaka’s head is visible. So many games fail on the attention to detail for the graphics. Usually it’s all about the physics or goal and graphics get neglected. The animations also make this one slick app. Little Chaka will hop on one foot when you give your phone a good tilt and you’ll see the flickering of the fireballs as they rain down.

Overall, I think this simple game is a great addition to your iPhone page. And I really like that you can remove ads via an in-app purchase option for only $0.99. Give this a try if you haven’t stopped to do so already. What are you waiting for?

Here is a video demo of the Hot Chicks: Watch Your Head app on the iPhone