Hungry Chicks is a wonderful little arcade puzzle game for the iPhone and iPod touch in which you have to get the mother bird to the hungry chicks in the nest, collecting the right number of worms required to feed them on the way. There are also changing obstacles like swinging blocks, electricity fields and rotating platforms to contend with. The whole bird theme may already be a little over used, not to mention the three star scoring, but the different idea of moving the birds by opposite force is a nice change. 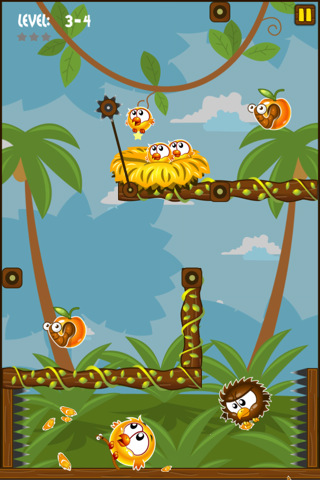 The controls are basic, where you press determines the direction and velocity with which the bird flies, that’s it. It is a bit of a problem that your fingers can obscure your view, but for the most part it is not a big issue. Some people have complained that the limited real-estate on the iPhone means that when you are trying to move one bird, it causes the other to move as well, personally I thought it was deliberate on the part of the developers and it certainly adds to the challenge.
The graphics are good and the artwork is very cute and ranges from basic catroon in the background to high quality on the characters and the detail is excellent. 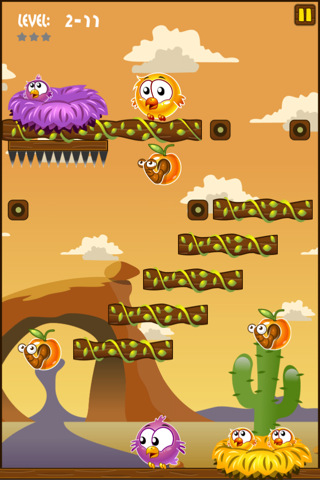 Some of the levels can be testing and patience is key, if you are the type that likes to rush through games, this one may not be for you. I found that the frustration of failing a level just made me more keen to get it right, and before I knew it I was completely obsessed with it. The game is suitable and entertaining for all ages so it’s a handy one to have in a boring situation. The levels are also short, so you can put it away and carry on later if you have other things interrupting your play time.

The Hungry Chicks app is not universal so you will have to fork out somewhat more for the iPad version, but the iPhone version is selling for $0.99 at the moment and it’s worth that.