Tiny Wings is a fun new iPhone app from Andreas Illiger that has just taken the top spot in the App Store over Angry Birds. The game features a small bird with tiny wings who wants to fly and needs your help. The problem is the bird can only fly during daylight, so you have a limited time in which to cover as much distance as possible. When night falls, the level ends as your birdie run out of time. The bird uses a series a slopes as ramps to jump and even fly for short periods, sometimes flying over the ocean from island to island with max speed. 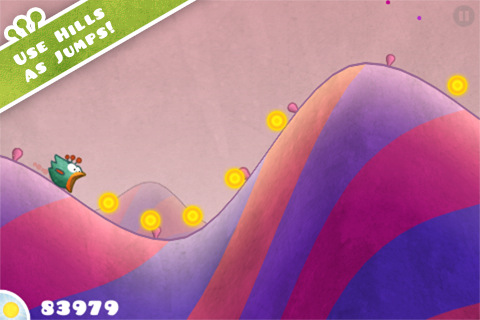 The game is split into levels, called Nests. Finish the objectives in one level to move to the next one. For example in the first nest you have reach the 4th island, do 7 jumps and collect 100 coins to move on. 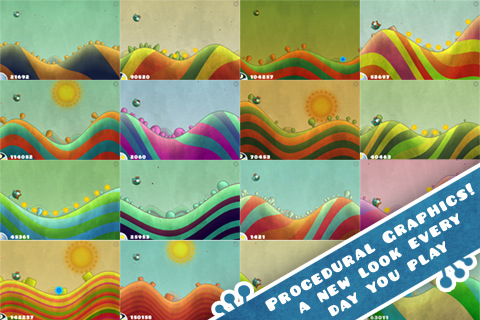 Graphics in Tiny Wings are amazing and use a pastel finish to give the game a polished feel. There is also a catchy soundtrack and cute little sound effects when the bird gets a ton of air or eats the power-ups. Speaking of which, there are coins and blue pills in the first nest. The blue pills give you speed and you need to collect the coins as objectives. This game also has a procedural engine, meaning the content is dynamically generated. So each day you play you’ll notice a different look and feel to the graphics.

If you love casual fast paced games with a cute factor Tiny Wings is a must have. The action flows quite smoothly, and the graphics are amazing and change dynamically as day turns to night. It’s very easy to quickly learn and get hooked on Tiny Wings. I just wish it offered a bit more in terms of building up your character.