It’s all fun and games until these birds lose their eggs. Angry Birds from Rovio Mobile & Chillingo’s Clickgamer is an insanely addictive and fun physics based iPhone game where you slingshot various birds to take out pigs in block made bunkers. So the story behind the game is basically pretty simple and shown to you in the form of a mini cartoon. Pigs have stolen the birds’ eggs and have obviously really upset these birds to the point that they want nothing but revenge on the pigs.

Angry Birds is broken down into 3 levels, each with 21 challenges that you clear one at a time to unlock the next. Each level starts out showing you the pigs hiding in their bunkers and then the camera pans left to show your angry birds, screaming and grunting, ready to go to war. The bunkers are made from a variety of materials, mainly either glass, wood, or stone. Attacking is done by catapulting a set of birds from a giant old fashioned slingshot towards the pigs. You just tap and drag, then release when you have the angle right. As the bird hits the blocks, depending on what its made of, it breaks, shatters, or cracks, and the bunkers start to crumble down, eventually toppling over, crushing the evil piggies. 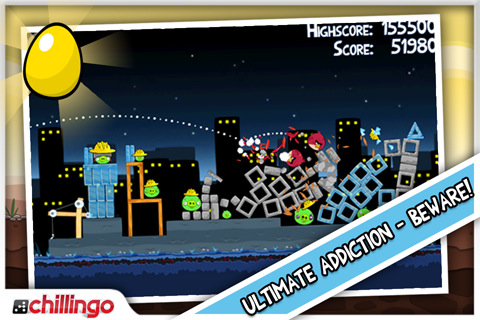 The physics in Angry Birds is amazingly fun and lifelike. Each level adds a new challenging and fun puzzle of bunkers to break, and as you go on you get more and more birds to shoot out, each with their own unique characteristics. Tapping on the birds as they are in flight engages their super powers and also fires off their goofy and funny sound effects. The sounds in Angry Birds is actually one of its main strengths, so be sure to turn up your volume. The birds are so eager, and have attitude, and you hear it in their voice and its really quite a blast to listen to while you play. The pigs are also pretty funny and blurt out little sayings as they die, and an evil laugh when you lose a round.

The music played through the Angry Birds is very original and entertaining as well, and it reminds us of the music you hear at the Disney theme park sometimes. Very cheerful and upbeat. Finally, even if you finish each of the levels, you can go back and try to improve your star rating by destroying the bunkers with fewer birds each time. A little tip to help you aim long shots: you can zoom out to see the entire field by pinching.

There is really nothing to complain about with this awesome little physics strategy game for the iPhone. The only little annoying thing that we ran across was after you finish a round, it sometimes takes a few extra seconds before you get the “You won” or “You lost” message. This seems to be due to the game waiting for all moving objects to come to a full stop so it knows if a moving rock could end up killing a pig etc, which does happen sometimes. These chain reactions are actually quite fun to start and with some creativity and strategy you can cause some amazing ones. Going through all 63 puzzles is never dull or repetitive. The challenges actually get increasingly difficult, more rewarding and exciting as you get more powerful birds. Here are all the birds you get throughout the game:

Red birds: Are pretty powerful, they fly pretty far but don’t really have a super power. These are good for plain and simple destruction of wood and stones.

Yellow birds: These are great for ramming through a bunch of wooden or glass blocks. Tap them in flight and they get a boost of speed as they attack.

Blue birds: These are little tiny birds, but tap them in mid air and they become 3 birds. Using them in the right place is great for causing enough damage to kill a few pigs.

White birds: They are pretty fat so, they don’t fly too far, but tap this angry bird in mid air and it drops a large egg that acts as a bomb, destroying anything it hits.

Black birds: Probably the most powerful of the Angry Birds bunch, the black birds are like cannons. Tap them in mid air to explode. Or better yet have them land on blocks of rocks or wood and watch them explode in a few seconds, taking out everything around them. 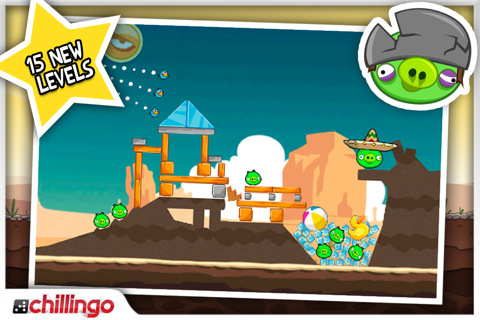 Update: Version 1.5.1 has been released adding 15 new levels. Plus a Super Bowl ad tie-in. Watch the Rio Movie commercial during the 4th quarter of the Super Bowl to find a hidden clue which unlocks a special level of Angry Birds. There’s also an in-app purchase for $0.99 to add Mighty Eagle to the game.

If you missed the Super Bowl Ad for Anygry Birds Rio, here it is. There is a hidden code in the last few seconds of the ad written on one of the boxes that you can use to unlock a special level.

In case you can’t find the code, here’s a screenshot to help you out. 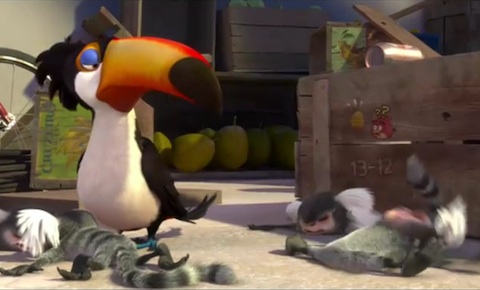 Update: Angry Birds Rio is now out for iPhone.

Overall, Angry Birds is the best iPhone game we’ve played this year so far, and we can’t recommend it enough. Easily worth the $2 and sure to keep you busy for days.