What is it about minimalistic games that makes them so good? The fast learning curve? The simple-yet-eyecatching graphics? The fact that you can play them during intermission or for the entire show? Whatever it is, Unwind’s game app, Dwindle, has it in spades.

The pencil-and-paper theme has definitely been done before, but perhaps not quite like this. Three different shapes in three different colors will appear on or float into the screen: purple squares, yellow circles, and blue triangles. The objective is to get rid of the shapes by drawing the corresponding shape with your finger: for example, if you want to remove the circles, draw a circle. Make sure the outline encloses as many yellow circle shapes as possible, but you can also move it after you’ve created it (tap and drag with your finger). Tap within the outline to clear all the corresponding shapes within; shapes caught in the outline that don’t match will both lower your points and change into another shape. You can freeze the moving shapes by tapping on them, so as to make it easier to capture. The more shapes captured within an outline, the higher your points will be. 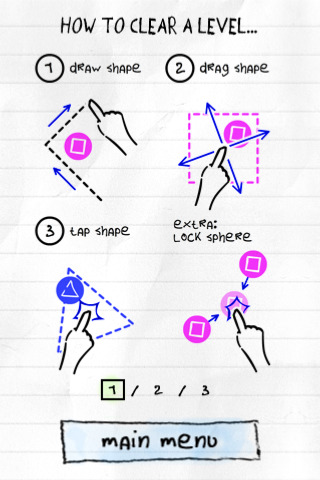 There are also three other objects that will randomly appear to help you–the Ability shapes. They are: Chain Lightning, Gravity, and Magnetism, and are enabled by a tap while within an outline. Dwindle only has two modes you can play: Action and Endless. But don’t worry, the Action game mode is separated into increasingly difficult levels, each of which are timed (finishing a level before the timing runs out earns you bonus points). You can always go back and play a level you’ve already passed, if you want to try to beat the high score. The Endless mode allows you to hone your shape-drawing skills without the pressure of a game-clock.

Dwindle is horribly addicting–when you finally lift your head from the screen, don’t be surprised to find that a couple of hours have passed and you’re nursing a strangely sore drawing finger. The deadly combination of a game clock and short levels make for a great hook, especially when the shapes start popping up fast and furious. It’s a straightforward concept that is executed in a very polished manner, despite a somewhat rough appearance (it’s thematic!). It even includes a bit of physics with the Gravity Ability, and the music is exciting, not that you’d notice–you’d be too busy frantically trying to clear level after level. Capture this terrific app for $1.99 right now!