Neon Rush is a game app. by Skyler Saleh where you tilt your device to move a ball around so you can destroy blocks. To get to the next level, you have to destroy all the blocks on the screen. As you move on to higher levels, the points you are awarded for destroying blocks gets higher, but you have less time to complete the level. You are awarded extra points and time if your ball is the same color as the block(s) you break. You are awarded with a “power up” if you break a block that changes color (most of them stay the same color the whole level). The power ups come in three varieties: Hyper Ball (blue shock wave), Multi-Ball (green shock wave), and -1000 points (red shock wave). The first two are good, and the last one obviously is not. I don’t really understand what type of block you hit to get 1000 points deducted. You can be awarded additional balls temporarily from the power ups to help you destroy more squares. At one point, I think I had six or more. 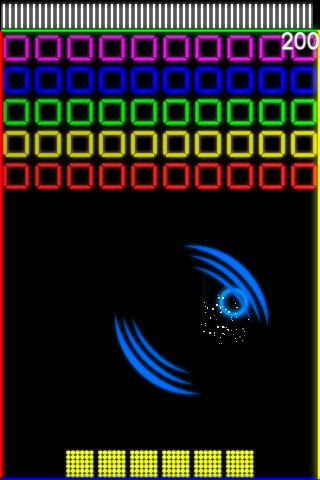 Basically, though- you don’t have to pay attention to any of the above rules to have fun at this game. It’s the ultimate pick up and play app.- I am usually horrible at games, and I almost instantly reached a high score of 559,808,161,600. I don’t know how that measures up to other people’s scores, but it sure made me feel good. The game is fast-paced, colorful, and the levels change quickly. The graphics are obviously simple neon shapes, but the white specks that the blocks give off when they’re destroyed and the shock waves that move across the screen keep things interesting. And there are new patterns and arrangements of blocks each level (with less time to destroy them in), so it remains challenging without being impossible.

You have the option of downloading music from iTunes to play alongside the game, which is cool and all, but I felt cheated that there was no default music for the game. I definitely felt the absence of a fun, repetitive beat in the background of my block smashing.

Neon Rush is FREE, bright, mindless entertainment. Add it to your game collection, I bet you’ll find that you’re playing it a lot- I’m sort of addicted.