Remember mobiles? Those dangly things people hang over cribs? Well, turns out that it can be very tricky to put one of those together, especially when you’re adding things like bowling balls and submarines. Now available for the iPhone and the iPad, Levers is a newly free port of an old Flash game from VectorPark that is based around the delicate balance of the humble mobile.

The physics of the game are fairly impressive. You start off with a single hanger over water. Using the accelerometer and your brainpower, you want to make sure it stays level, even when you eventually start adding items that drop from the sky. You don’t get the next item until you’ve managed to balance everything without dipping into the water. 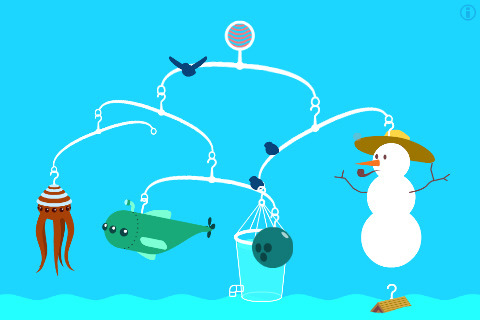 I suppose it goes without saying that none of these items are especially normal, and some of them interact with others in odd ways. For example, at one point you get a squid wiggling about and at another there’s a snowman.

I liked the concept of Levers a lot, but it was definitely on the challenging side, especially trying to grab things on the small screen of the iPhone. Items will stay put once you’ve placed them, but more than once I found myself accidentally grabbing the wrong thing and throwing the entire balance off kilter, and trying to hook objects into the tiny loops when the entire contraption is swinging and tilting can be a little frustrating to say the least. Plus, at least on the iPhone, the accelerometer controls aren’t so great, and everything gets more complicated when moving elements are introduced.

Visually, Levers has the bright and clean appeal of a children’s book, and if your kids can handle the rather sensitive nature of the controls, it’s an entirely kid-friendly app. It’s also fairly short, so it doesn’t require a super-long attention span to get through the whole thing, but there is also no option to save, so those possessing an exceptionally short attention span may be out of luck.

Because Levers is very basic and also freely available online, the original price of $0.99 may have been a little much, but with its currently free price tag, there’s really no reason why anyone shouldn’t try out this fun little physics toy. Bottom line: the game is short and the controls aren’t perfect, but it’s still a nicely designed bit of cheap fun.