I’ll be honest with you. When I saw Multiball Pinball for the first time, I was a little disappointed. Matmi’s Monster Pinball was a real gem with its six connected machines, colorful graphics, and smooth gameplay. I didn’t know how Matmi was going to one-up that release. So when I heard about Matmi’s new release, Multiball Pinball, I just wasn’t that excited. What? It only offered one machine? Yes, just one.

Luckily, I gave it a chance and was happy to discover that it’s one heck-of-a-machine. You will too. Just don’t expect all the flash of multiple machines with this one like I initially did. Matmi strove to create something new, something different with this release. They took the aspect of what pinball gamers crave from pinball games–multiball play–and highlighted it. Their game lets you focus on playing 3 balls at the same time in 3 levels of difficulty. The machine is hosted by a blue creature named Mango, who shoots rays during your play. The aim of the game is to stay alive as long as possible and accumulate points to get a high score which will be easy. It’s so easy that the goals of the game almost seem like an afterthought. You’ll focus on just trying to keep all three balls playing at once. 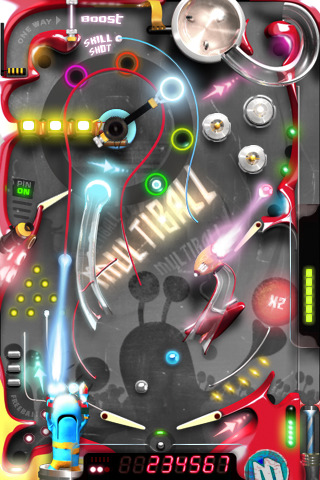 If you’re a fan of Matmi’s Monster Pinball, you’ll recognize the freeballs and appreciate the tilt capability of the machine. But you’ll also be happy to see that they incorporated user input and created a built-in location for tilt warnings; added multiball action (hence the name); and double point scoring Xballs. Overall, gameplay is very smooth. Controls are streamlined and really make this one polished app. The physics engine feels even more realistic and there is no lag time from what I observed. The machine boasts 60 frames per second. There are also local and online leaderboards and integration with Facebook Connect.

The newest release looks just as good if not better than one of the old machines. There’s just so much stuff going on, that it will take you awhile to discover just how packed Multiball Pinball really is. And once you start, you’ll be hooked on the fast-paced action. Luckily, you can tap anywhere on the left and right side of the screen to control the left and right flippers. The game will also automatically save if you need to take a breather. The game gives you the option of resuming the game on start-up.

Matmi developers devotion to details is what keeps me a fan of their work. The graphics and animation are simply astounding. Your eyes will be so busy trying to take everything in that you’ll forget to blink. Try some eye drops. Your ears will also be pleased. The sound effects and soundtrack are so fitting that I can’t find one simple thing to complain about them. They work seamlessly with the game and enhance play. You won’t tire of the soundtrack or the different sound effects that will ring when your balls hit different parts of the machine.

Overall, this is one standout machine. You should definitely get this if you love multiball action. But if you’re a fan of multiple machines in one game, you will find yourself questioning whether or not it’s worthwhile. Here’s a cost comparison for you: Multiball Pinball will cost you $2.99 for one jampacked table whereas Monster Pinball is $3.99 for six beautiful, linked tables. If you’re a newbie to Matmi offerings, I’d recommend you give Monster Pinball a try before you buy this one. And if you find that you’re satisfied with your buy and have the extra money to spend, then purchase Multiball Pinball. Either way, I hope to see you on the online leaderboards.