Tetris and Reversi got together, made a kid, and called it Among Us. True it its old school roots, this game looks like something you played on Atari when you were little (oh no, I just dated myself). When you choose to play against others online, the game even plays the old dial-up tone that played when people used to plug their computers in to get online (I did it again). All of the graphics follows suite, simple layout, quirky sounds, but all done very tastefully.

As mentioned earlier, you can play online as long as you’re connected to wi-fi. You can choose to play against two or four people. Or you can play offline against the computer. Thankfully, the developer, Tom Brow gives you the option of playing an easy computer, or a hard one. Seriously, it gets really hard. You can also choose a board to play on, the bigger the board the more room you have to maneuver, but this also leaves space for mistakes. 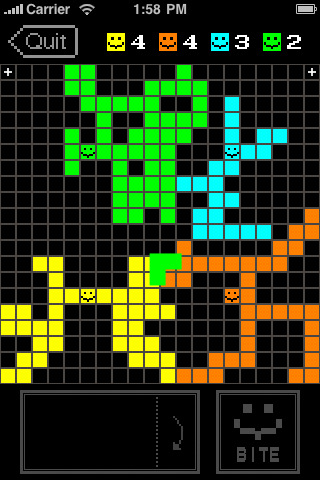 Basically the little blocks are fungus, and you need to place different shapes around your pieces to grow your fungus, think Tetris. After you’ve surrounded your opponent’s fungus, your fungus will destroy theirs, think Reversi. You also have a certain amount of “bites” to take your opponents fungus away and replace it with yours. It took me a few tries to get the hang of, and once I did I realized how difficult it was. A huge bonus is when you are placing your pieces on the board; the small piece you’re dragging isn’t directly underneath your fingertip. It’s more off center to your finger, allowing you to see exactly where it will be placed.

And last but not least, the humor of the game and the context was not lost on me.
The fact that this game is called “Among Us” and it’s about fungus brought a huge smile to my face. It’s been a while, but Incubus’ album, Fungus Amongus used to be in heavy rotation in my CD player (ok, you probably get it by now, I’m old). This reference alone would get me to purchase this iPhone app.

This 3rd Party App is available at the Apple iTunes AppStore. Browse the full list of all AppStore apps filed under the AppStore category.
Download Among Us at iTunes App Store
Price: $0.99
Developer: Website
AppSafari review of Among Us was written by Amanda McFarland on April 28th, 2010 and categorized under App Store, Fun, Games, Puzzler. Page viewed 3709 times, 1 so far today. Need help on using these apps? Please read the Help Page.