Originally released for the PC in 2008, Call of Atlantis is an exceptionally polished and professional match-3 port. I’m not generally impressed by match-3 games, but it’s rare to find such an attractive match-3 title with any sort of depth or attempt at story. Call of Atlantis sets itself well apart from the rest of the pack, a surprising standout in an otherwise cookie cutter genre.

Like all match-3 games, there is the familiar grid and matches to make, but Call of Atlantis tweaks this formula a bit to give you additional goals beyond a high score. You are charged with restoring Atlantis to its former glory, which means traveling to cities throughout the ancient world to collect the crystals of power.

At the start of every new city, you get a mostly accurate mini-history lesson, complete with pleasant voice overs and lovely graphics. Each city has certain artifacts you must recover before you can obtain the power crystal, and these artifacts are broken up within the level grids.

To obtain the artifact pieces, you must get them all the way to the bottom of the grid, a challenge complicated by various obstacles, like frozen pieces or unbreakable blocks. There are also various power-ups you can obtain, like bombs or extra time, but even with those stockpiled, later levels become very tricky.

Once you’ve collected all the city artifacts, there’s a very basic mini-game to play, but it’s rather silly and doesn’t add a lot to the overall experience beyond showcasing the admittedly gorgeous art direction. Overall, the game looks and feels very rich and luxurious, and it’s much more polished than most anything else available. 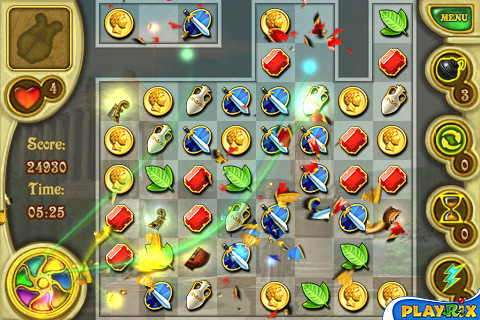 Usually match-3 games are a piece of cake, but I was definitely sweating some of these levels. There’s a surprising amount of strategy involved if you’re to successfully complete a level, although I was frequently thwarted by somewhat imprecise controls. For the most part, the controls are smooth, but pieces will occasionally make an unintended swap in a different direction. The game is also something of a battery drain, which shouldn’t be a huge concern, but it’s definitely something to keep in mind.

Despite developer claims, the current version does not appear to properly load for iPad and iPod Touch users, so buyers beware, but at $0.99, it’s a steal for you iPhone users. Match-3 games may not be the most innovative genre out there, but Call of Atlantis definitely gives you plenty of bang for your buck.

This 3rd Party App is available at the Apple iTunes AppStore. Browse the full list of all AppStore apps filed under the AppStore category.
Download Call of Atlantis at iTunes App Store
Price: $0.99
Developer: Website
AppSafari review of Call of Atlantis was written by Tracy Yonemoto on May 26th, 2010 and categorized under App Store, Fun, Games, Puzzler. Page viewed 6782 times, 3 so far today. Need help on using these apps? Please read the Help Page.