When I first encountered U Connect, I thought it was some kind of social networking thing, so imagine my delight when I discovered that it was actually a clever puzzle game! Trust me, nifty puzzles are are loads better than reconnecting with old “friends” from high school.

U Connect is one of those delightfully minimalist games that you can just pick up and play without having to learn a lot of complicated rules. The object is very simple: draw the shape on the screen without retracing any of your steps. Just drag your finger from point to point to draw a line, simple as that. If you should mess up, you can always backtrack or just erase and start over. There is also a hint system to help you through the especially tricky parts.

It’s exceedingly simple to learn, but it swiftly emerges as a challenge, the longer you play. Early levels have obvious shapes, like basic triangles and squares, but shapes quickly become more complicated, with lots of dots to connect and additional hurdles, like one-way lines or dotted optional lines to obscure your goals. It can be maddening, but also addicting and highly satisfying. Best of all, the full version comes with over 1000 puzzles, so it can keep you engaged for days and weeks on end.

Adding to the fun are a few different play modes, usually speed run variations, and there is also a demo mode that you can use to let friends have a try without messing up your own game. Unfortunately, there is no easy way to revisit a level once you’ve passed it, but with so many puzzles to solve, it’s a minor annoyance.

The graphics are minimal at best, but you do have a choice between a white-on-black chalk layout or a black-on-white pen layout. Sound is also very minimal, and everything about the app feels designed to be as clean as possible. 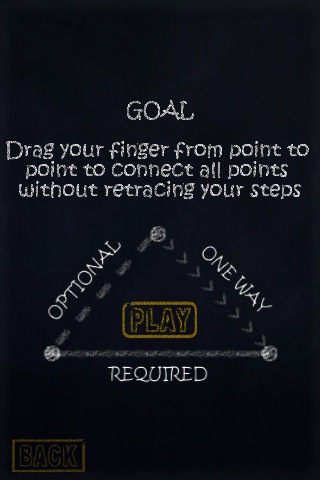 Interested iPad users will also be delighted to hear that this is a Universal app and will run natively on both the iPhone and the iPad. There is also a free Lite version for those of you who prefer to give it a test drive before committing, but the number of puzzles that come with the full version make U Connect a well worthwhile purchase for those with an itch for clever puzzles.

Bottom line: If you like simple, elegant puzzles, U Connect is absolutely worth checking out.