Shooters have been a gaming staple since the pixelated dawn of video gaming, and the App Store certainly reflects their enduring popularity with dozens of various shooter types. Many of these are space-themed, like Meteor Blitz or Space Miner, but far fewer take a more realistic approach, which is where the WWII-themed AirAttack comes in.

Currently, only the Lite version is available, but I have to admit even with a truncated version, I was pretty impressed, because who doesn’t get a kick out of bombing Nazis? A top down, vertically scrolling shooter, AirAttack puts you in control of a single figher plane in the midst of a massive battle. In addition to enemy planes, you must also worry about anti-aircraft towers and tanks, and you can use your bombs to take out various bridges and buildings along the way.

Visually, the game is quite impressive, loaded with richly detailed backgrounds and sharply designed enemies to encounter. The game’s sound is also pretty marvelous, thanks to epic background music to keep you pumped as you fire away at approaching planes. The overall feel of the game is brilliant; think of the classic 1942, only with much updated graphics. 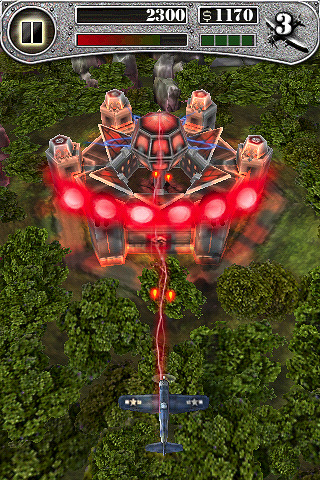 You have a choice of control types, either tilt or touch. Because of the often tricky maneuvering involved, I vastly preferred the touch controls. Although both take a fair amount of getting used to, the touch provides vastly superior control over tilt mode, but even with touch, it’s not an easy game, and it’s fairly unforgiving to new players. There’s no real tutorial to ease you into the action and your lives are limited; Death was my constant companion during early levels, but with a little practice, the game became a really fun challenge.

The sheer number of bullets on the screen can be brutal, but the epic boss battles provide a nice interlude between massive waves of enemies, and there are enough power-ups along the way to keep you going. Outfitting your plane at the floating shop also provides a very useful boost to your destructive capabilities and keeps you on track of an ever more awesome array of weapons, including additional flanking planes.

AirAttack may not be the absolute ideal of iPhone shooters, but it is definitely a solid entry to the App Store. I, for one, am looking forward to seeing the full version finally make its debut, but until then, the Lite version is quite generous and available now.