Mascots are often cute and cuddly, and The Miracleworks’ Pix is no exception. With its rounded body, dual analog-tube head, and emoticon facial features, Pix exudes a Wall-E-style charm that’s hard resist, especially while faced with the challenges of PushPixPull, The Miracleworks’ fantastic new game app featuring Pix. 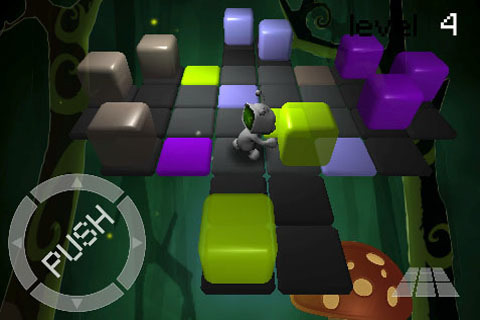 The objective of the game is to make sure the colors on the playing field don’t repeat in any direction–all the colors (except white) going down a column or across a row must be different. Move Pix around using the d-pad on the bottom of the screen; press up against a block to grab onto it, and double-press away to release it (or move to the side, which I’ve found easier to perform). Once you’ve got a block in Pix’s possession (it can grab it from the front or back), drag it to a gray square to complete the puzzle. This game app also keeps track of the number of steps Pix makes in each level, so plan carefully.

Tapping the gray perspective button on the bottom right switches between a top-down view to an angled one; the top-down view is best for strategizing, and the angled view is where you can watch Pix’s awesome faces. You can even change up his default face by tapping the arrow on the top left to roll out the menu and settings.

As you play PushPixPull, it actually tells the story of Pix’s journey. This app contains the full eight episodes for only $2.99. Each episode is a self-contained environment that has five different levels to pass before unlocking the next episode. Not only are there different graphics and backgrounds for each episode, but there are also different soundtracks for all eight, stylized to fit the world you’re in. The further you are on the journey, the harder the level becomes. Bigger grids, more colors, and even obstacles on the playing field are some of the hardships you’ll come across. If you like games like Sudoku, you’ll probably love PushPixPull–it’s cute, well-crafted, and tough as heck to win. Try out the first two episodes for free, but the full package is the best price and completely worth it. Immerse yourself in Pix’s worlds and flex some brain matter by grabbing PushPixPull right now.