Think fast: your bride and close friends have been kidnapped by a giant snake at your wedding…what do you do? Why, go after her like the valiant knight you are, of course. Armed with sunflowers and superior jumping abilities, you set off on a journey to retrieve your loved ones, battling snakes and collecting hearts along the way in 7th Playground’s platformer app, Black Tie Adventure. 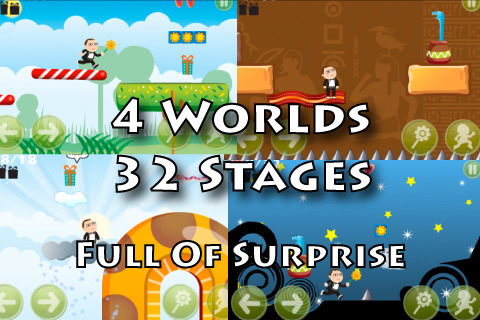 To move, use the left and right arrows on the left side of the screen; tap the flower button to swing out with your sunflower, and the last button to jump. There are 4 unique worlds with 32 stages in all to get through. You’ll be met with snakes of various colors: just jump on them or strike out with your sunflower to get rid of them. A neat little extra is to hitch a bit of a ride on the rising ghost of the fallen snake.

There will be hearts to collect while you’re running around; collect enough, and you’ll receive a ribbon and accolades. Also to be found scattered throughout the levels are your friends, stuffed into boxes. Run up to them to free your friends, because what kind of friend would you be if you didn’t? Ultimately, you’ll have to face the biggest snake around in a fierce boss fight to regain your bride.

7th Playground’s Black Tie Adventure is like a modern day version of Mario, except without the size changing mushrooms. The graphics are bright and cartoony, never losing its sense of fun. The soundtrack is a remixed mash of well known songs, so it’s a nice surprise to hear a melody you recognize when jumping on snakes. The biggest gripe about Black Tie Adventure is the lack of checkpoints–no matter how far into a level you are, losing a life sends you right back to the start. All that hard work for nothing! It rather discourages me from playing. However, the developer promises to add checkpoints in the next release, so you can look forward to that. I’d price it more at $0.99, since the game is so straightforward, but fans of Mario would get a huge kick out of Black Tie Adventure.