Food service games have gone Asian! SouthPeak recent release of their time management game app, Sushi Go Round, brings our focus to Japan cuisine. Based on the free web-based Flash game of the same name, you are the go-to sushi chef who has to meet a daily profit goal while running a sushi restaurant.

Customers show up in front of you, and have to be given a menu (tap the small white square to the left of the sake bottles). Once they decide on their order, you’ll have to figure out how to make it using the Recipes book and all the ingredients in front of you. Tapping on the ingredients will send them to the bamboo mat, and another tap on the mat will send the finished result out to the conveyor belt. While you are preparing the food, customers might get impatient (keep an eye on their indicators)–soothe them with a tap of sake. 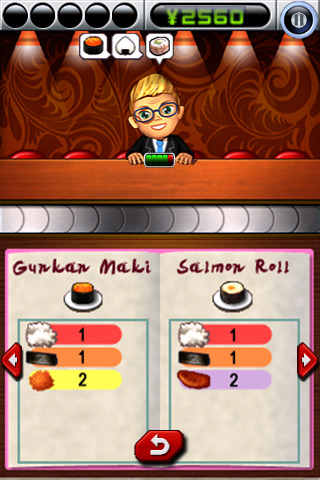 Of course, ingredients aren’t everlasting, and eventually you’ll have to replenish them, especially if it’s a busy day. Tap on the phone to order whatever ingredients you need, and choose either standard delivery (which is free, but slower) or express delivery (which costs 50 yen); you’ll need to balance monetary goals with customer satisfaction. Once the customer is finished, clear the dish by tapping on it. Sushi Go Round has two modes: Story and Rush, the former which hosts 20 separate levels.

As expected of a game with settings in Japan, Sushi Go Round’s design is definitely geared towards the “cute” end of the spectrum, with bright colors and lots of detail. The background and customer designs are quite varied, right down to the facial expressions. Unfortunately, the same cannot be said for the soundtrack: if the developers were aiming for “cute,” they got “horribly annoying” instead. Thankfully, you can turn the music off, but you can’t use your own. Having a Story mode doesn’t make a lot of sense, since really, you’re just trying to make money, so playing this game might become repetitive sooner rather than later. However, the gameplay is simple and the controls are very easy to suss out and utilize, so if you’re a big fan of food service games, Sushi Go Round will be worth your while at only $0.99