Fast Slice, a game created by 66001.com for the iPhone and iPod touch, has me a little stumped. Even now, after toying with it for several days, I’m not entirely sure how to play. Perhaps the main problem with Fast Slice is that English is not the first language of its creators. If the instructions made more sense I could at least attempt to grasp the game. As it is, they are comprised of broken English that “sell” the game more than they explain it. Though I did not find it “addictive,” as advertised, I did find it fun, albeit confusing. 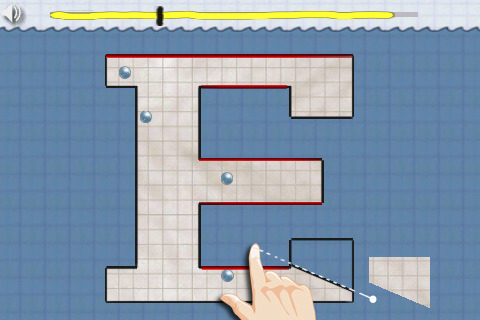 What I like about Fast Slice is that it relies on some level of intelligence. While the instructions are not straight forward (or legible) the game is challenging in and of itself. Essentially the goal is to slice off pieces of a large box in the shape of an initial in which a certain number of balls are bouncing to enclose them in a tighter space. The number of balls depend on the level at which you play. The difficulty is making the right slices at the right time. As the game explains, it relies on the “simple yet challenging principle of perfect timing.” True as that may be, I’m not entirely sure how to beat the game yet or id I’m even playing right. As you play you unlock each ensuing level, playing with more balls that bounce in increasingly complicated spaces. With each game you must narrow the space more and more without separating the balls or tampering with the red colored borders, or “barriers.” This can be difficult at times, but with practice you develop strategies to maneuver the balls, bending them to your will.

Familiarity with a similar type of game would be a definite plus and certainly you’ll need patience if you wish to advance. The graphics are minimal–a graph of gray squares encompassed by a black border in the shape of a letter–and the balls are realistic looking. Fast Splice is like a modern take on pinball except that it lacks the fun gadgets, colors, and noises of a pinball machine. Maybe if the soundtrack was The Who’s Pinball Wizard this could be redeemed, but since it lacks music and mimics the noise of a racket ball each time you make a slice, I can’t say it garners the same kind of entertainment value.

This is not a multiplayer game, it is not addictive like it promised, and it does not explain itself very well. With a little practice you can get the hang of Fast Slice, but that might be more trouble than it’s worth.