HI THERE! ZOMBIE BILLY MAYS HERE WITH A GREAT DEAL FOR YOU! EVER FIND YOURSELF HUNTING HUMANS FOR SPORT IN THE JUNGLE AND WISH YOU HAD A DEADLIER ALTERNATIVE TO A MACHETE? MAYBE YOU JUST WANT TO RIP OFF ADRIEN BRODY’S HEAD? WELL, YOU’RE IN LUCK, BECAUSE FOR THE LOW, LOW PRICE OF ONLY $2.99, YOU CAN HAVE YOUR VERY OWN PREDATOR KILLING MACHINE, COURTESY OF THE APP STORE! THE PREDATOR SLICES, IT DICES, IT EVEN JULIENNES HARDENED MERCENARIES AND CRIMINALS WITH THE GREATEST OF EASE! BUT WAIT, THERE’S MORE! IT EVEN WORKS ON THE IPAD! THAT’S RIGHT! SO DON’T DELAY AND ORDER YOURS TODAY!

All joking aside, the new Predators app really isn’t too shabby, especially for a major movie tie-in. The app has you taking the side of the bad guys for a change, as you help a vicious alien Predator hunt down dangerous human prey in a lush tropical setting. To win honor and bloody scalp trophies, you must master various tools and weaponry along the way as you gleefully eviscerate your puny mortal foes. All in all, it’s a satisfying gore-fest, not for the faint of heart. 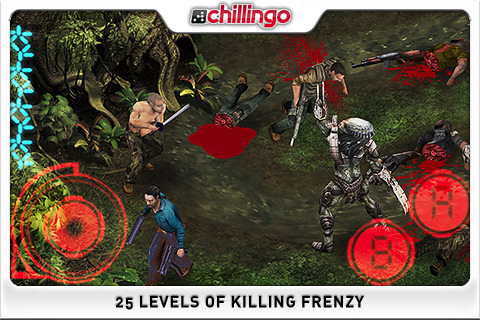 The game is broken down into 24 bite-sized, but intense levels. Every level has its own particular objective and usually a whole lot of killing. You unlock different attacks and weapons along the way, and Predator fans will be pleased to find that the classic thermal vision plays a big part later in the game, but your trusty wrist blades will almost certainly see the majority of the action. There are only a handful of buttons to keep track of, but like any great button masher, although the controls look simple initially, there are a ton of killer combos to unleash.

Unfortunately, the controls aren’t always super responsive, and this gets frustrating when trying to pull off specialized moves like trophy kills. The game also has a tendency to freeze and crash on occasion. It’s not very often, but it’s just enough to be noticeable. Thankfully, despite these issues, gameplay is still highly satisfying and well-structured for new and veteran gamers alike. Unfortunately, although there is an endless survival mode at the end, there are no difficulty settings, so there isn’t a ton of replay incentive.

The detailed jungle settings, however, look great, if not especially inspired, and the overall quality of the graphics and sound is very high. You can’t expect movie quality, of course, but it keeps pace rather nicely and definitely works hard to evoke the sinister feel of the film. Instead of the Predator chasing down generic human victims, characters from the film play a major part in the game, and there’s a little backstory available for all of them.

Predators isn’t the best or most creative game out there, but it is one of the best marketing tie-ins I’ve ever played. Even without its big budget Hollywood connections, there’s a lot to like about this universal app, and it’s definitely a worthwhile purchase for you hack ‘n’ slash fans out there. If you have a taste for professionally produced gaming violence, you can’t really go wrong with Predators.