Bullet Race, an invigorating game developed by Alacom and compatible with the iPhone, iPod Touch, and iPad is priced very moderately at a mere 0.99 cents. In my estimation, the graphics, music, and creativity are all above par and the game itself is addicting.

Bullet Race requires you to clear a series of levels, each increasingly harder than the last, and encourages you to do so in the quickest manner possible. There are not sharp turns or circular race tracks involved, but a colorful space-age tube full of obstacles that you drive through. To increase speed you must drive your car across a green block with a spade printed on it; to slow down you drive over a red block of the same design. In most cases you want to avoid the red ones that slow you down, but sometimes too much speed makes it impossible to maneuver the car properly and slowing down is to your advantage so that you don’t hit the various walls in the middle of the road. Despite being “futuristic” the game feels very 80’s and the car looks more like a hover craft. One of the best features it offers is the option to race other people playing the game. If you are connected to the Internet you can compete with other people around you and share your score. The song is also really catchy, making it hard to put the game down. Even though they are relatively similar, the different levels, or tracks, offer enough variety that the game doesn’t feel that redundant. They are assembled rather creatively and their colors really sparked my attention. The first five levels are automatically unlocked for you, but to advance further you must beat the proceeding race. 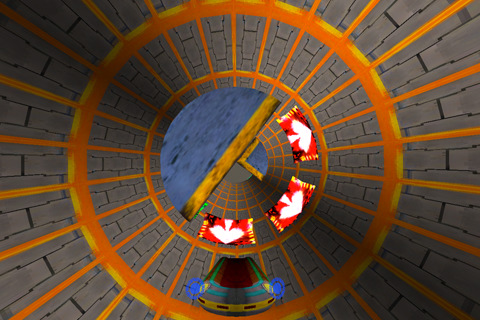 I would have been happier with Bullet Race if you could control the car in more ways than just tilting the screen, but overall this method worked pretty well. Naturally, it was hard to be precise maneuvering the car by just tilting the screen of the iPod, but in most cases I avoided the various obstacles. Or maybe not, since my record score was just barely under a minute. Maybe if there were other ways to measure skill in this game, like certain targets that would give you points as you sped towards the finish line, this game would be a bigger deal. While it’s worth it’s cost, I can see this game easily slipping away into obscurity just as quickly as it emerged, going back from whence it came.