Some people are natural risk takers; I am not one of them. If you told me to jump out of a plane and go hurtling towards the ground, you’d get an emphatic “NO!”, and it would take a lot of money to convince me otherwise. Don’t get me wrong, it looks like it might be fun; I’m just not big on the overly present prospect of death and/or dismemberment should something go wrong. That’s why I prefer to experience death-defying acts from the comfort and safety of my living room, courtesy of my iPhone and a cutesy little app called Crazy Parachute.

Instead of the adrenaline rush of potential doom, I can launch a dopey looking avatar of my choosing out of a cartoon plane and let them deal with the hazards of the sky and, eventually, ground. You’re also racing against three other skydivers, so speed is of the essence, as you must be in the top 3 to advance to the next round. 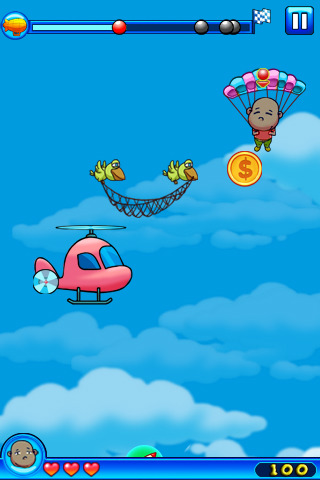 The controls are very basic. After the friendly countdown, you tap to jump out of the plane, but remember to be patient, as there’s a penalty if you try to jump to soon. As you fall, tilting the phone from side to side allows you to avoid obstacles like birds and nets. Crashing into one costs you valuable time and gives your little stand-in a headache, but not as big a headache as you get if you forget to discharge your parachute. To discharge your parachute, you simply tap the screen again. Do it too soon and you’ll lose more of that precious time, but do it too late and SPLAT! Don’t worry, it’s all very kid-friendly with nothing graphic, but only safe landings count in the rankings.

Crazy Parachute is very cute and even a little addictive, partly thanks to cheery graphics, but I absolutely hated the obnoxious looped music, and the game suffers a lot from it’s overly basic nature. The level designs have a lot in common with endless jump-type games like Doodle Jump or Bird Strike, but because you are falling instead of jumping, and racing to the ground, no less, the action is over too soon to be truly satisfying. There’s also no way to adjust the tilt sensitivity, which didn’t really give me a lot of trouble personally, but I can see how having that option would be useful for many people.

There also isn’t a lot of variety to be found, both in the levels and the available avatars. It was disappointing to only have a scant handful of avatars to choose from, and then having the leftovers as my competitors for every single round was just lame. Also, shooting for not last place is not an especially inspiring goal during a race.

There’s nothing particularly wrong with the game, but it’s a little too generic to be really good, and it’s definitely far too dull for the “crazy” nature promised by its title. Younger kids may find this one appealing, but adrenaline junkies will find themselves sorely disappointed.