If you enjoy watching your opponents eat your dust while you race to victory, then play Spokko’s Penguin Airborne app on your iPhone, iPad or iPod touch, where the objective is to beat fellow parachuting military penguins to the ground without becoming a penguin pancake. Easy to learn and morbidly entertaining, you won’t be able to help yourself from cheering every time you survive and another cute penguin dies instead in this tricky game of last-man-standing.

The default penguin in Penguin Airborne is a macho-looking bird with a belt of ammunition strapped across its chest and a red bandanna. If you find yourself unable to relate to this macho creature, tap on Change? and choose a different color and penguin. When you’re set, tap on Play and be prepared to be toyed with, because his is a game of elimination, where being last means a missile to the head and a quick trip to penguin heaven. Move through “rankings” on each level, and the last penguin standing can go from a lowly private to a powerful General.

Playing the game is very simple. Tap the screen to start the countdown but do not jump until you hear Go! If you try jumping before Go!, you’ll be frozen in a block of ice, slowing you down when the real jump happens. Once you do the jump, tilt the device side to side as you free-fall through the air to collect stars for more points. When you’re close to the ground, a light will flash and a beeping sound will start to signal that you should open your parachute soon. Make sure you’re not last to touch the ground (in order to move onto the next level). Not opening your parachute in time will cause your penguin to smash into the ground, resulting in a game over. Open your parachute too late and landing too hard will result in a decrease of your life bar. Landing hard too many times will result in a death regardless of whether or not you open your parachute. To really bring home the military theme of this game, Penguin Airborne comes with a tiny penguin commander telling you when to jump and snarking at you when you don’t make the cut. The art and graphics are simple and cute; the accompanying music is exciting, matching the tenseness of the situation where opening your parachute too late or too soon will result in death. 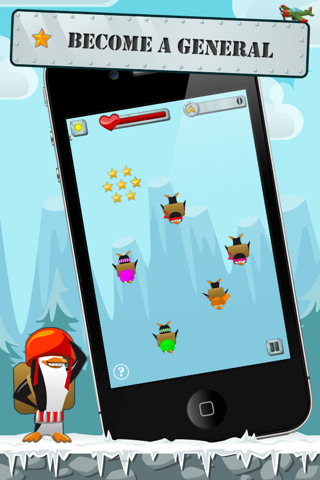 There were a few issues with Penguin Airborne that might put off pickier gamers. The buttons are not very responsive. This can get rather annoying when tapping on the same button five times gets no response (although you will eventually get a response). This does not affect gameplay since you’re tilting or just tapping on the screen when you play. But selecting options or even just clicking Next can be a bit tricky sometimes. The game could also stand to be more challenging. After the first round, the difficulty level goes up a notch and then stays there for a few levels before moving up incrementally. This was great because I was able to actually get past the first few levels but I soon found myself enjoying the deaths of the other penguins more than the satisfaction of beating the level. They could also include a wide selection of backgrounds to make it more interesting. They might be penguins but it would be fun to watch them drop into jungles or a desert to mix things up a bit. Penguin Airborne has the potential to become a good game but this will require more updates with more features thrown in. The quirky concept and the dialogue in the game is amusing, making the game entertaining despite the little issues.