For addicted wordsmiths looking to triple word score their next lexical high, Words With Friends is yet another two-player crossword app to help you scratch that itch. It should come as no surprise to anyone that the game is remarkably similar to another popular classic (starts with an “S”, rhymes with “babble”), so the learning curve is likely to be very low for anyone who has ever endured a family board game night, but it’s a very thoughtfully designed implementation.

First things first, you’re going to need some kind of network capability, be it 3G or wifi. This is absolutely vital for WWF’s main feature: the ability to run up to 20 games at a time. This is a two-player online game, and you will always have a real person on the other side. As anyone who has played the spiritual predecessor Chess With Friends knows, taking turns back and forth online with a human being can be slow, but when you have several boards going, as you almost certainly will, there’s almost always a turn handy as you find yourself revisiting the game throughout the day.

You can challenge friends or strangers, and there’s even an option to look up people by user names. Unfortunately, this does mean mandatory email registration and account creation, and finding random opponents can be a bit slow, but there’s also a handy pass-and-play option for more social types who want to hit the ground running.

While the basic rules are the same, WWF on the iPhone is slightly different than Scrabble, including a different board layout and tile distributions, but nothing that will offend anyone other than the absolute purists. The game itself is the same old (insanely addictive and competitive) thing, but additional features like a chat option and Push notifications launch it into the digital age.

It’s not a graphics-heavy game, to be sure, but WWF looks quite sharp and possesses a wonderfully smooth interface, although the zoom feature takes a bit of getting used to, making it mildly challenging to place tiles at first. I was a bit surprised that the game doesn’t have a computer opponent option at all, and it also doesn’t keep a detailed account of the score, but these were minor annoyances at best. More frustrating was the inability to save completed boards and the slow update times during popular hours. There have also been reports of frequent crashing since the latest update, although I didn’t encounter any problems with my OS4 3GS. 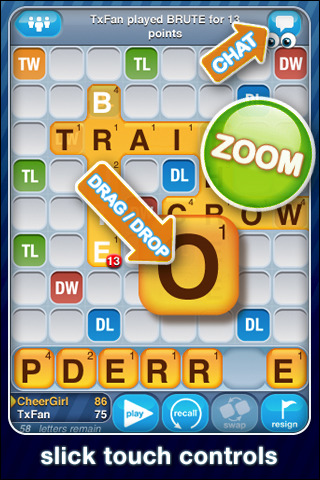 Since everyone is trying to save money these days, there is a free version available with the exact same functionality as the paid version, only with ads. That said, freedom from ads is a beautiful, beautiful thing, and this is the nicest Scrabble-type app I’ve played, even superior to the official Scrabble app. It’s not without it’s flaws, to be sure, but if you like word games, and even if you don’t like them, Words With Friends will likely become a fast favorite.