The Hawker is a food serving game where you put ingredients on a skewer and sell it to customers who have specific wants consisting of different ingredients, orders of the ingredients, and whether they want sauce or not. This app is available for the iPhone, iPod touch, and iPad and is released by Li ka Ho. The more coins you get for your food, the higher your standing will be in Openfeint.

I’ll start with the graphics. The Hawker (strange name, btw), is filled with bright and colorful visuals. Much of the food seems to be from Japanese cuisine including small baby octopus, squid tentacles, what looks like deep-fried fish and beef balls, and some other miscellaneous foods. I like this kid-friendly style of cell-shaded big-headed characters. It works. 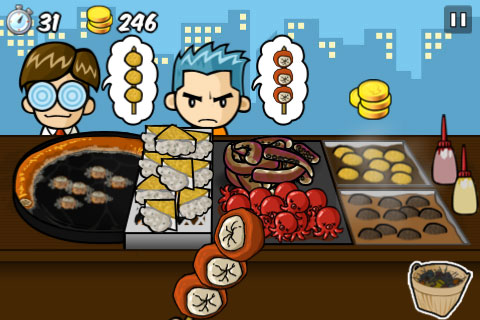 Game play consists of dragging food from the table of ingredients onto a skewer and dragging the skewer to the customer who is apparently dreaming of the ingredients. Apparently, you have psychic powers to read what type of shishkebab someone wants, but whatever. The customers will sometimes have different orders that they want the food to be in, so you have to accommodate to their needs. These guys can get really frustratingly impatient however.

Sometimes, you only get around 3 seconds to somehow read what they want, drag to food, drag the stick, and finally hand it over to that customer. It’s nearly impossible to keep up with and the game will start throwing more people at you over time.

Also, I ran into a rather annoying glitch early on. On app start, the menu shows up bright and colorful. When I hit the Play button, the screen dimmed and the instructions for how to play were really dark and never loaded properly. When the game started, I had no idea what just happened and had no understanding of what I was supposed to do or how to do it. Not sure if I just need to reinstall the game, but it was a noticeable issue.

The Hawker is a decent food selling game and it has its fun style and simple gameplay mechanics make this a relatively good game. They really have to balance how difficult a customer can be however since it can frustrate you and force you to start over.

Version 1.2.2 update:
Welcome to The Hawker version 1.2.2 back with a whole new minigame and some very important tweaks and fixes. The Hawker is a food serving game where you tap and drag different ingredients onto your prepared foods to satisfy the tastes of the customers that appear. Released by AMC Workshop, The Hawker is available on the iPhone, iPod touch, and the iPad for $0.99 and comes in a Lite version.

The original game of skewers, sauce, and serving customers remain relatively the same. You still serve Japanese cuisines such as fish balls, baby octopus, or squid chunks to customers, sometimes with sauce, sometimes without. In my first review, I mentioned that the amount of time you have to prepare and serve the food is extremely short and can become frustrating. Well this issue has been fixed! Now you can actually serve up to 3 people during the fastest parts of the level. I could only serve 2 at a time however since the difficulty of relatively complex actions gets confusing, but I’m sure more hardcore players could easily overcome the user interface.

There are some issues still over the sauce distribution however. I can almost never grab the dark brown bottle of sauce on the first try. The hit detection is sketchy on those bottles since the lighter brown will almost always be selected, causing a loss of customers, therefore a loss of time and money.

The new mini game is a waffle making game. You have two waffle makers, a batch of batter, butter, and sugar, and the gameplay consists of dragging the batter to the right shaped maker, waiting, tapping the cover to reveal the waffle, and then dragging sugar and/or butter onto the waffle. You then drag the waffle into a bag, drag the bag to the customer, and then tap the money to get the payment. If that sounds like a lot of work to multitask and manage against 3 very picky customers, it is. It’s hard. I just can’t get into the pattern and at many times, wished that I didn’t have to tap the cover to access the waffle, didn’t have to throw away the waffle if the customer has a butter craving and I had already dragged it into the paper bag. Why can’t I just toss the butter into the bag? It’s just not very forgiving.

There are two locations available on the map when you start the game. The level with the waffle making costs $5000 coin to access. This means you have to play the Skewer mini game for quite a long time to finally gather that amount. There are many blackened icons on the map too, but they seem to not be implemented yet. There are multiple maps that are also unavailable at the moment, which makes me think that The Hawker will have possible new themes coming soon.

This was a very challenging game with patterns and procedures that take a long time to adjust to. The Hawker is still a decent mini-game app with some difficulty fluctuations, but overall, it’s a relatively good game.