As far as alliterative titles go, Syd Sym’s Sweet Symmetry is pretty good–and as a bonus, it’s a pun! A matching/pattern-making puzzler from Thaddaeus Frogley (a Harry Potter-esque name if I’ve ever heard one), Syd Sym is an exercise in arranging different sorts of candy for maximum display effect (i.e. points).

Different candy pieces will drop randomly into the box from the top of the screen. To move them, tap on the desired piece and hold to slide it around the box. You can’t always move them freely, however. If there are other candies immediately surrounding the piece you want to move, you’ll have to move those out of the way first. Unfortunately, moves that are unnecessary will detract from your points, so be careful of what you move. 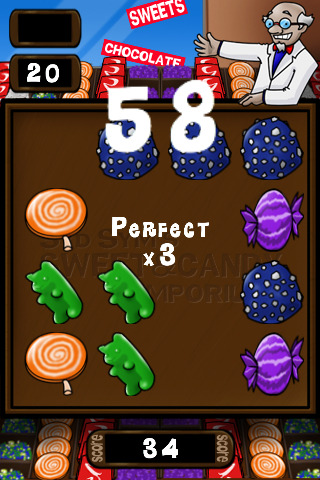 Each level has a certain number of points you must obtain in order to move on to the next level. To gain points, move and arrange the candies–even the ones that have already been scored–into symmetrical patterns, which can run both horizontal and vertical. For example, a lollipop on either side of a gummy bear or two chocolate bars next to each other would be patterns. The number of points earned from a combo is scored based on the number of pieces in the pattern; patterns within patterns are also scored. As you progress, the number of points needed to pass a level get higher and higher. All the combos you’ve uncovered (there are 30 in total that can be scored) can be reviewed through an icon on the home screen.

I like finding patterns and have a major sweet tooth, so Syd Sym is pretty much tailor-made to my interests. Although the space restrictions are suitably frustrating at times, this game is a tad overly simple: therefore, younger children may find more enjoyment with it than adults (and will get to work on their pattern-recognizing skills in the meantime). Using children as the target audience, the bright, cartoony graphics and jingly, looped background music are just right. As it is, Syd Sym is a great temporary distraction for adults, but those used to more sophisticated games may grow bored rather quickly. Fortunately, there is a free Lite version that does much of the same as the paid version. Best enjoyed with a sugary confection lodged firmly in mouth!