The old-school way to pass the time was to whip out a book of puzzles: word search, crossword, logic puzzles, etc. Now, you all you have to do is carry around an iPhone or iPod Touch. Word search enthusiasts will be thrilled to know that Paul Burkey has just released a new word search game app. However, DaisyWords is not your grandmother’s word search–it has grown.

DaisyWords, as the name implies, incorporates the creation of daisy-chains to create a word search puzzle. Daisy heads appear on screen, all with a letter emblazoned on their faces. Your job is to clear the screen of the daisies, and to do that you will need to connect letters to make words. Just like in making a daisy-chain, you need to choose letters adjacent to each other; using letters across the screen from each other is not allowed. You can either tap the letters in succession and submit the word by double tapping the last letter, or you can slide your finger from letter to letter (the word is submitted upon finger lift, given that it is the right word). Tap the background to clear all letter selections. 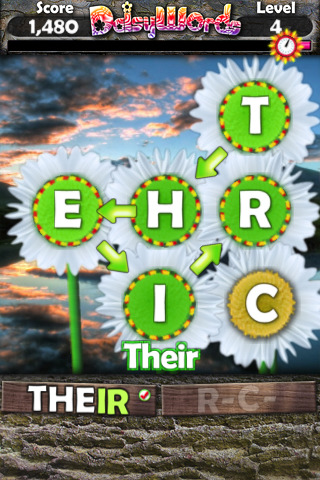 The wooden boards on the bottom of the screen look like they belong in a game of Hangman, for they have words with letters missing. These are clues as to what words to make out of the daisy heads; once a letter has been removed from the word pile, the daisy holding it will disappear. Make sure you don’t take too long to think, though. Each level is timed, as indicated by the timer bar at the top of the screen. Once all the daisies are gone, you proceed to the next level. However, if you’ve made achievements like solving the level at superhuman speeds, you get bonus points, level skips, or both. There are more than 48 levels to go through, with progressively harder/faster gameplay. Tap the title on top to pause or quit the game, and rest assured that the game has auto-save and auto-continue.

DaisyWords is definitely a special flower: the concepts behind the game have definitely been around for a while, but the way it is executed in this game brings in a breath air and revitalizes it. It’s a bit harder now that the letters aren’t in a grid, but that’s half the fun. I loved that fact that the daisy heads were big enough that users will rarely connect the wrong letters, no matter how big their fingers. The graphics–consisting mostly of the daisies–aren’t mind-blowing, but the photo backgrounds are very pretty. The music and sound effects are a fun funky little tune that goes along well with the game. I did find it annoying, however, that users will be sent all the way back to the beginning upon losing; perhaps a way to replay a failed level will be a good addition. DaisyWords is a cute, well-packaged tribute to a classic game, and is only $0.99.