One machine that has been a staple of war has been the tank. Nigh indestructible, the tank is a hulking vehicle that lends a feeling of security and invulnerability that people find appealing. Noumena has created a game app that has you piloting battle vehicles, machines that are reminiscent of the tanks on our world. In MadMaks (a play off of Mad Max, I’m sure), the battle vehicles each have names, most of which you can only use after you’ve unlocked them.

There are 10 stages, or Campaign Games, in all; all them are locked, so to progress to the next stage, you must win the one before it. In each stage, you are given a mission to complete. Usually they are along the lines of “destroy all the enemies in the vicinity,” but sometimes there are more specific instructions. Moving the battle vehicle involves a combination of the d-pad on the left side of the screen and tilting the device; small arrows in the bottom center of the screen allow your vehicle to drift. Keep an eye on your health bar on the upper left, because the level is lost if you’re killed. 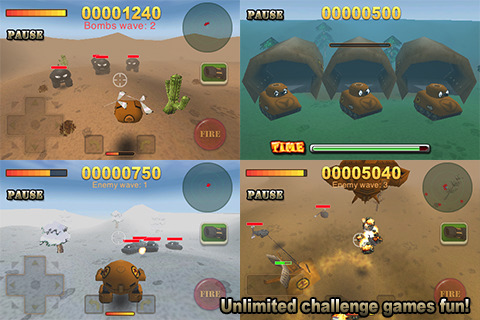 The Fire button on the right is pretty self-explanatory, but know that holding the button raises the angle at which you’re firing. The button above the Fire button lets you switch weapons, if the Mak is equipped for it. Watch the radar on the upper right side to find out where the enemy is (your Mak is in the center), and then proceed to destroy. Depending on how well you do–how accurate you are and how many kills you make–you are awarded points and Bonus Stars. Bonus Stars unlock the Challenge Games, which are mini-games you can play in between campaigns. There are three modes of difficulty: Easy, Normal, and Hard, which is locked until you finish all 10 stages.

The 3D world of MadMaks is nicely enough rendered, but the best aspect of this game is getting to pilot all the different Maks. Once you get used to steering (you can turn off the accelerometer function if it’s too much), swerving and drifting to avoid enemy fire is pretty fun because the controls are responsive. However, the rest of the time (i.e., when you’re just using the d-pad) you’re kind of just toddling around at a super slow speed, especially in the lower-end Maks; I know tanks are slow and lumbering, but too much realism can bog your action game down. Also, it is a good thing that the game isn’t too picky about aim, because aiming is sort of a crap shoot. What is the use of utilizing crosshairs if they don’t actually point at the object you’re aiming at? Other than that, MadMaks is a really solid game: the battle vehicles are cuter than battle vehicles should be, the gameplay is exciting and smooth, and the music exciting (and not war-themed, surprisingly). Try out the Lite version for free, but you’d be getting a seriously reduced game.