Field Fencer is an app board game based on capturing squares by placing up fences at the right time. The player with the most captured spaces wins. This app is available for $1.99, is available for iPhone, iPod touch, and iPad, and is released by Nutomix Interactive.

Field Fencer is pretty literal with its name. You play against CPU, against another device via Bluetooth, or against a friend on one device. The graphics are kid-friendly and extremely cute-tified. There are animals you can play as, such as the cat, the pig, the panda, or the boar, and almost everything has a grass/wood theme to it. 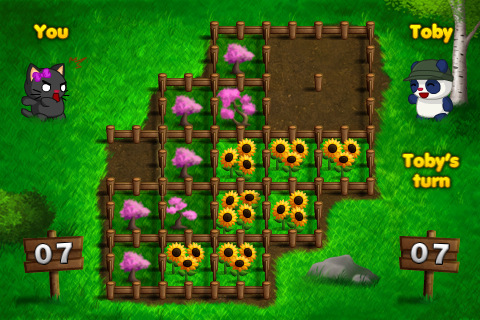 The game play is pretty much a new spin to an ancient game. You have a grid of dots. Each player takes turns connecting one dot to another with either a horizontal line or a vertical line. The goal is to try to complete a square, which then becomes 1 point for you. If you capture a square, you must make a new line. This can create massive chains of captures if you and your opponent set it up correctly. Unfortunately, this will happen a lot, and on hard difficulty, the CPU just knows how to leave you with only one option… the option that will give your opponent a 5-10 point lead instantly.

I had some fun with my girlfriend playing this since it was such a simple game. The variety of level types with variation of wall set ups make almost every game unique, but the sheer amount of times one of us lost due to the final chain was punishing. I won’t blame Field Fencer for that; however, since that is just the way the rules for the game work. You are meant to dominate the field if your opponent lets you. 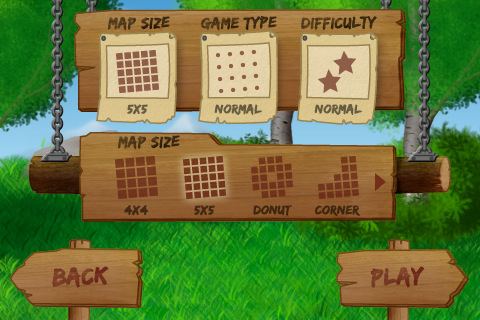 The overall design of the game is nice and fun, the controls take some time to adjust to, but it’s a quick pick-up and play game. The best parts of the game are the character animations. When you capture, your little animal avatar taunts your crying opponent. When your opponent dominates the field, you jump back in surprise and anger. It is all extremely cute and the whole package works well.

This isn’t a deep and extensive game, but for what the game play is, it works very well. For making a relatively famous pen-paper game available for the App Store and making it cute and kid friendly and visually appealing, this game deserves praise.