Ah, thank you Apple for creating the ultimate device for porting all our traditional games into digital form. Today, we have Dots-n-Bombs, an enhanced version of the old dot-box game. Available as a universal app, Dots-n-Bombs is brought to us by Dogbit Software for $0.99.

This app heavily reminds me of Field Fencer, an app I months ago. The basic concept is you capture squares by drawing lines on a dot grid. Set up carefully or else you might end up giving your opponent a ton of points in an unrecoverable chain. Dots-n-Bombs gives us the ability to play against a CPU opponent or play against friends through pass-n-play or connect between devices via Bluetooth and WiFi. Options are always good, so nothing to complain about there. 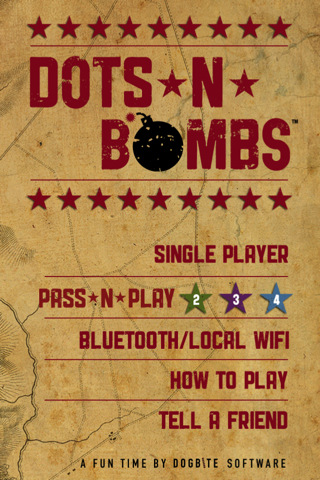 Dots-n-Bombs have several additions to the classic game. Like in its name, you now have access to bombs. If you enable the option, you can get access to 3 bombs: Large bomb- which destroys stars (captured squares) within a 9 star square, medium bomb- which destroys stars in a 4-star square, and a bubble bomb, which defends 4 stars in a square from both players. These bombs do add some challenge and strategies to the standard game though it should be noted that lines around the blast radius are unaffected. Only the lines inside the explosion range will be destroyed. 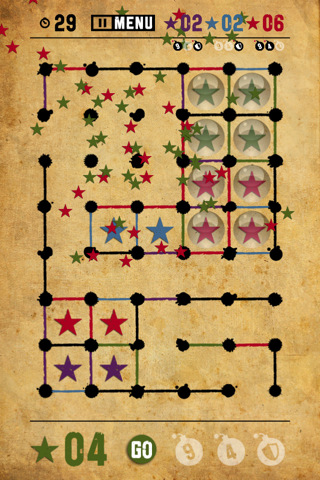 Even with the options however, I have a couple of issues. Firstly, I have no idea which boxes I have captured. The colors of the two players are so similar, it’s impossible for me to separate the colors. If it were more obvious like red and blue, that would have been extremely helpful. No, instead, it looks like dirty red and a dirty green, the two most common colorblind colors. I know I bring this up in nearly every review, but seriously developers, why do you choose such similar colors by default? Why not orange and green? Red and Yellow? Contrasting colors that honestly isn’t that difficult to recolor and won’t bring up any excuse from people like me who have difficulty playing your game.

The CPU of Dots-n-Bombs feels a tad unfair at times. The game always lets you move first but I find that 9/10 games I play against the CPU leaves me with the very last line to make before the CPU runs wild and takes the entire screen for itself since the paths are all laid out… it just needed me to fill in the last gap. 20 to 10 scores are common and I’ve only won against the CPU a few times, and that required more luck than anything. I’m sure as heck not the best at playing this kind of game, but it always annoys me when balancing issues aren’t the game developer’s fault… it’s the game itself.

With the additions of bombs, pre-made lines, and time limits, Dots-n-Bombs gives a new spin on an old classic. I had trouble with the CPU and color choices, but playing this against my friends in local multiplayer was fun and an easy way to pass the time while waiting for a table for lunch or waiting in the doctor’s office or something. Nothing more to say about that, try this app out if you enjoy the classic paper-pen game and don’t feel like wasting paper or ink.