You are a small, well trained, well-armed, and extremely skilled group of soldiers. A group of aliens in epic Zerg-sized forces invade Earth and it’s up to you and your team to take them out. This is a top-down shooter with RPG style leveling systems, weapon upgrades, missions, unlockables, and a dozen different enemy types. Project Sanctuary is available for the iPhone, iPod touch, and iPad and is released by Salient Holdings Limited for $2.99 at the time of review. 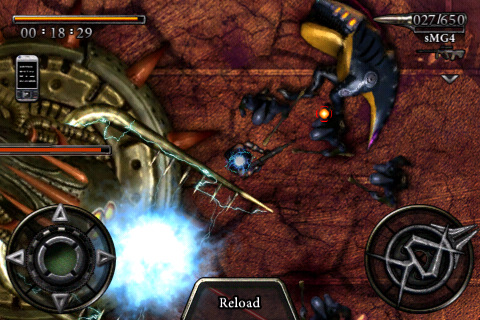 Project Sanctuary surprised me. At first, the icon (of a blue earth) and the title made me think this was going to be some form of environmental game. I dunno, a project to protect the Earth or something. After setting up a profile and looking at the character select screen, I realized how very wrong I was. This is a bombastic, bloody, high intensity, overkill of a game app. This is a top-down style game, similar to Asteroids… but the asteroids are actively trying to rip your head off.

Story is told through comic-style pages with black and white art. The art could use some polishing. Some of the comic pages could really use some clean up and coloring to show some professionalism in each page. The character designs for the character selection screen are really good in that nostalgic PSX era CGI cutscene style similar to Parasite Eve or Final Fantasy VIII. They are really well done and show interesting personality, however stereotypical they are. The in game graphics are really good. Like, REALLY good. One of the bosses in the game actually reminds me of something you’d see in Gears of War with the textures looking very well done with all the right accents and details. 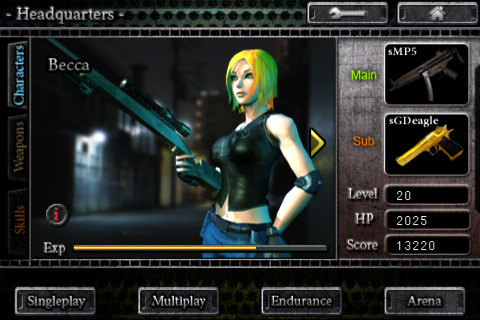 Monster designs range from the shock-stick toting purple alien to the Silent Hill 3 Numb Bodies’ big ugly grandpa. There are bosses that take on a more machine style look and your character portraits in game are distinctive, though a tad cartoony… which might have been the point. The music and sound effects are generally drowned out by the sound of constant firing, but to be honest, I was too busy trying to back away from the huge army of monsters trying to beat my face with electric sticks, bile, and giant claws.

The Project Sanctuary pace is frantic, sometimes heart pounding. Each mission has a set of 3 goals. To get the top grade and the best experience points and money payout, you must complete each of the 3 goals. Otherwise, you’ll end up with a B ranking. Not only is the B ranking a complete insult to a gamer like me, but it was the driving motivator to get me to replay missions over and over until I achieved perfection and that in turn got me a huge influx of cash and skill points which I could use to upgrade my reload speed, health, etc…

The story is actually pretty engaging, the gameplay is fun and fast though it can get a bit ridiculous when the big giant ones swarm you into a corner, and the weapons and leveling system are all extremely interesting and well done. The different characters all have unique traits that actually mean something in game, and the mission can grind a bit, but overall, feel extra rewarding because you perfected a particularly hard mission goal.

I really liked Project Sanctuary and I can honestly say that I am putting this one on my personal favorites. Of course, this is for version 1.1, where we get more money, improved animations, better and more realistic weapon sounds, and we deal more damage, which is very nice. If this last update says anything about this game, I’d think it says that it’s one app to keep an eye on.